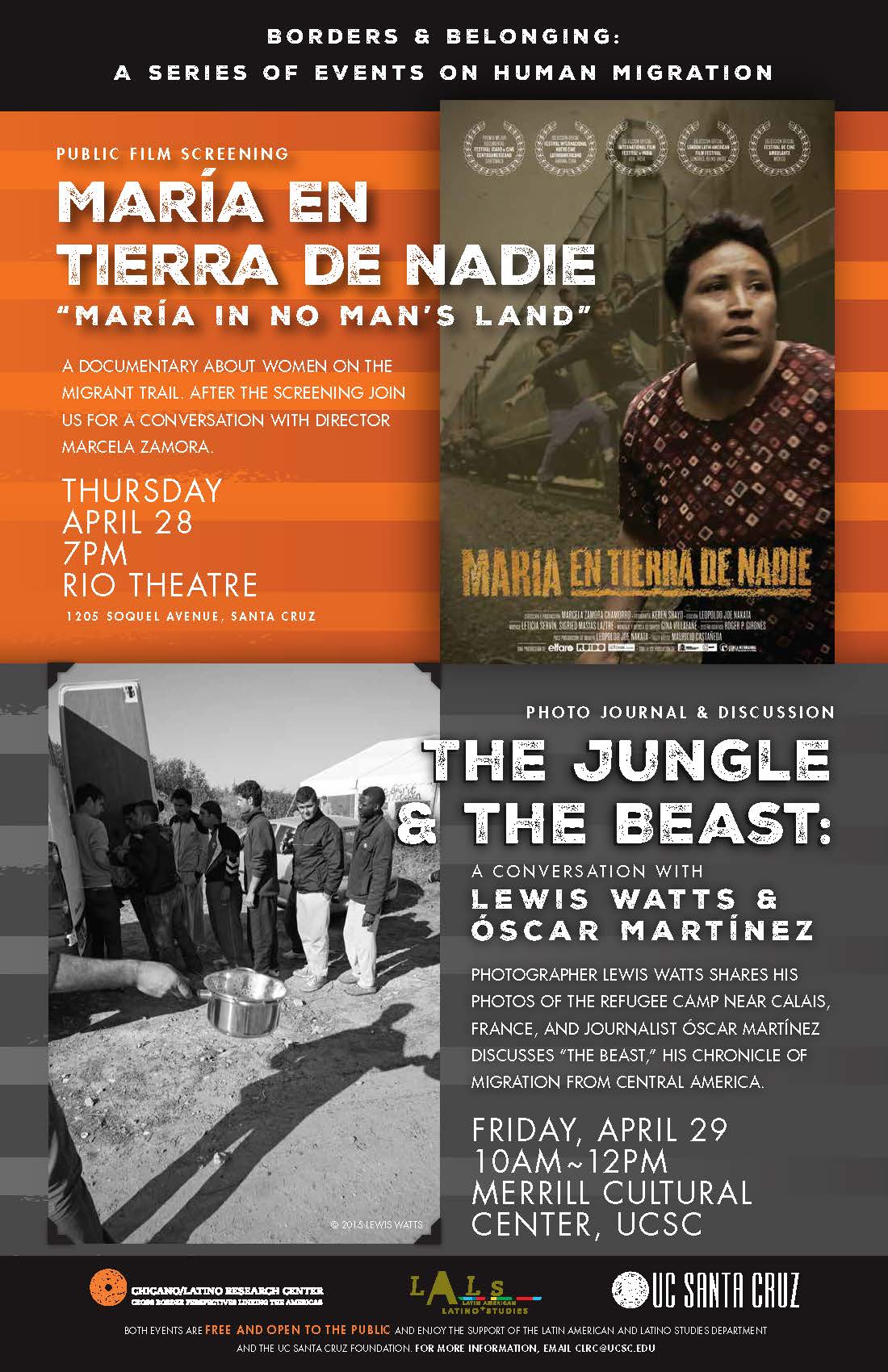 The Jungle and the Beast: A Conversation with Lewis Watts and Óscar Martínez

The Jungle and the Beast: A Conversation with Lewis Watts and Óscar Martínez is the second event in the Borders and Belonging Series hosted by the CLRC. In The Beast (Los migrantes que no importan, in the original Spanish), intrepid Salvadoran journalist Óscar Martínez accompanies migrants on “the Beast,” the train that travels from Central America through Mexico to the United States. Meanwhile, UCSC Professor Emeritus Lewis Watts has captured some of the stasis of migration in his recent photos of “the Jungle,” the makeshift migrant camp in Calais, France. Mr. Martínez discusses the migrant trail and Professor Watts shares some of his recent photos from Calais.
Click here for more info and to register for the event.

The title of Martinez’s celebrated book comes from la Bestia, the old and decrepit train thousands of migrants cling to every day in the hopes of crossing from Central America heading north. Intimately familiar with this scene from his days of on-the-ground reporting in El Salvador, Martinez compiled his short briefs into one searing look at the crisis of those who many call the “invisible people.” Martinez also is a staff writer for El Faro out of San Salvador and runs “Sala Negra,” a project with fellow journalists, investigating the challenging questions addressing and concerning gang violence in Central America. Launched in 2011, la Sala Negra cover Nicaragua, Honduras, El Salvador and Guatemala; four of the most volatile regions in the world today. The consortium works on issues mostly related to organized crime, prison systems and the culture of violence in the region. Martinez is widely considered a leading voice on these topics and migration related concerns throughout Latin America

Lewis Watts’ photos of “La jungle,” the makeshift migrant camp in Calais, France, describe an intimate and profound look at one of the most dangerous and heavily-trafficked migrant crossings in the world. As the Syrian refugee crisis continues to unfold in the news, Professor Watts’ imagery shows the universal face of the immigrant and forced migration struggle. The conversation will also be joined by Jennifer González, Professor of History of Art and Visual Culture, who will moderate the morning’s conversation about migrants and migration in different regions of the world.

Óscar Martínez is the author of Los migrantes que no importan: En el camino con los centroamericanos indocumentados en México (Icaria/El Faro, 2010), which was translated by Daniela Maria Ugaz and John Washington as The Beast: Riding the Rails and Dodging Narcos on the Migrant Trail (Verso, 2013). The New York Times has described Mr. Martínez’s writing as “graceful” and “incisive.” His second book, A History of Violence, is forthcoming from Verso in 2016. Based in El Salvador, he writes for Elfaro.net, Latin America’s first online newspaper.

Lewis Watts joined the Art Department at UC Santa Cruz in 2001 after having taught at UC Berkeley for 23 years. He is a photographer of cultural and urban landscapes, with a focus on the African diaposora. He has photographed African and Afro-descent communities in the United States, Latin America, and Europe and is the co-author (with Elizabeth Pepin) ofHarlem of the West: The San Francisco Jazz Fillmore Era (Chronicle Books, 2005) and (with Eric Porter) New Orleans Suite: Music and Culture in Transition (University of California, 2013).