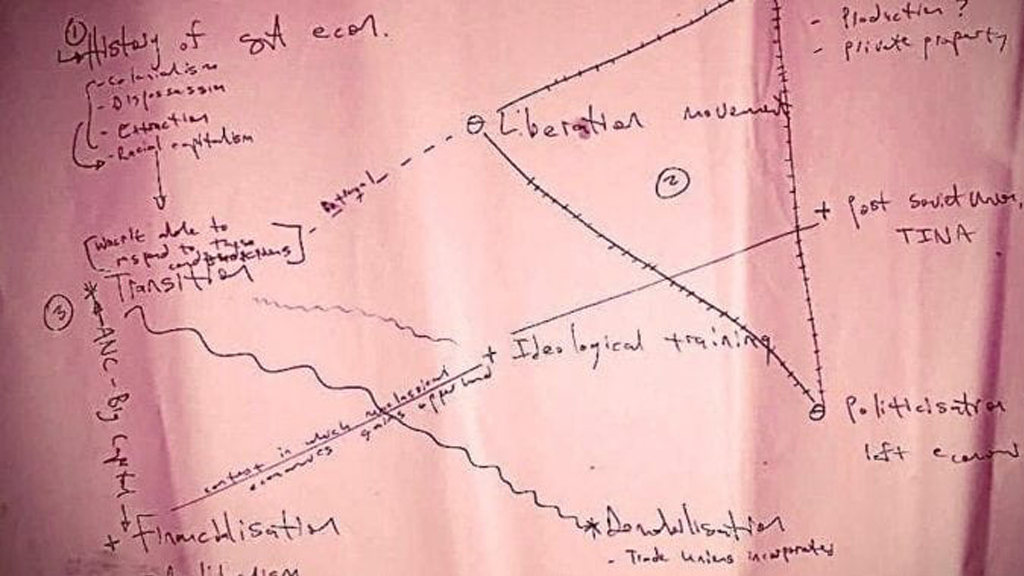 Two radical collectives in South Africa working inside and outside the academy to agitate against ongoing histories of dispossession consider what redistribution means in the most unequal national context on earth. This 50-minute film looks at how the promises of redistribution in the anti-apartheid liberation movement were foreclosed during the transition out of apartheid in South Africa. The film features three left economists who were active in the anti-apartheid movement but have lived through a transition in which the promise and idea of redistribution was abandoned as South Africa inserted a post-apartheid project into global processes of financialization and neoliberalization.

We will screen the film and then discuss it with filmmakers Asher Gamedze and Kelly Gillespie and featured economist Rasigan Maharajh.

RSVP by 11 AM on Wednesday, October 7th to receive Zoom link and password.

Kelly Gillespie is a political and legal anthropologist and cultural worker with a research focus on criminal justice and abolition in South Africa. She works at the department of Anthropology at the University of the Western Cape. She writes and teaches about urbanism, violence, sexualities, race, and the praxis of social justice. In 2008 she co-founded the Johannesburg Workshop in Theory and Criticism (JWTC).

Asher Gamedze is a cultural worker based in Cape Town, South Africa, working mainly as a musician, student, and writer. He is also involved, as an organiser and an educator, with various cultural and political collectives such as Fulan Fulan, The Interim, and Radical Education Network. His debut album, dialectic soul, was released in July 2020.

Rasigan Maharajh is an activist scholar whose research focuses on the political economy of innovation and development, including the changing world of work, democratic governance, and ecological reconstruction. He is the founding Chief Director of the Institute for Economic Research on Innovation based at the Tshwane University of Technology and Professor Extraordinary of the Centre for Research on Evaluation, Science and Technology at Stellenbosch University.

The Center for Cultural Studies hosts a weekly Wednesday colloquium featuring work by faculty and visitors. The sessions consist of a 40-45 minute presentation followed by discussion. We gather at noon, with presentations beginning at 12:15 PM. Participants are encouraged to bring their own lunches; the Center provides coffee, tea, and cookies.*