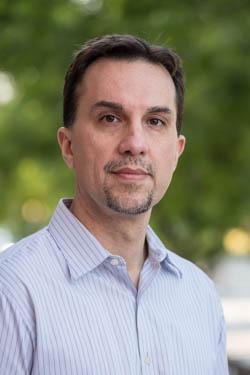 Cesar Estrella, a Ph.D. candidate in the Latin American and Latino Studies Department, won a prestigious Mellon/ACLS Dissertation Completion Fellowship award from the American Council of Learned Societies. These fellowships—made possible by a grant from The Andrew W. Mellon Foundation—support promising doctoral students in humanities and social sciences with $43,000 funding awards to complete the final year of their dissertation research and writing.

Estrella was selected as one of 72 nationwide fellowship winners from a pool of more than 1,000 applicants. He said the award has been “a huge relief” because it will allow him to really dedicate himself to writing his dissertation. Estrella studies the ideologies that drive U.S. national security policy, and over the past few years, he’s poured through thousands of declassified and leaked national security documents dating all the way back to the Cold War.

“The really interesting thing about these formerly classified documents is that, in them, the government actually tells the truth,” Estrella said. “Getting to read these documents shows you what analysts and policy makers were really thinking.”

Throughout these documents, Estrella is looking for indicators of how U.S. national security policy has evolved over time. The National Security Act of 1947 created many of the governmental policies and structures we associate with national security today, and originally, one of the primary goals was preventing nuclear attack. But much has changed since then.

Estrella sees this question as essential for understanding both foreign and domestic policy in the United States. After all, the U.S. has invaded or intervened in other countries many times over the years in the name of national security, including countries throughout Latin America. Meanwhile, national security is frequently evoked to justify domestic policies like militarization of police and surveillance of residents.

“What drives all of these policies is an ideology,” Estrella said. “If people believe they are under a constant existential threat, then they are going to be more likely to support these types of authoritarian practices. In a way, national security ideology drives nondemocratic practices international and domestically.”

Through his dissertation, Estrella hopes to shed new light on these ideologies and their global impacts in a way that might spark meaningful change. Currently, even the most harmful U.S. national security policies often receive little pushback from elected officials.

“There might be strong disagreements between Republicans and Democrats over many issues, but national security policies often garner broad bipartisan support,” Estrella said.

During the 2018-2019 cycle, Cesar Estrella was part of the inaugural cohort for the SSRC Dissertation Proposal Development Program. Please join us in congratulating Cesar on this outstanding accomplishment!