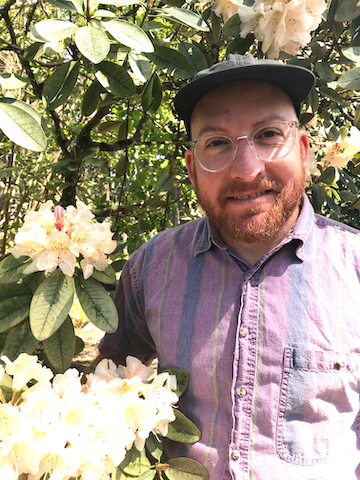 Adrian Drummond-Cole is a seventh-year PhD student in the History of Consciousness Department. His dissertation project, titled “Making Water Liquid: Hydraulic Settlement in California’s Central Valley,” explores the long history of water management in the Central Valley from the mid-1800s to the present. His research examines how “the seemingly neutral processes used to measure, monitor, monetize, and manage water in California often conceal histories of Indigenous dispossession, racial exclusion, and economic inequality.”

Hi Adrian! Thank you for taking the time to chat with us about your ongoing research. To start off, can you give us a general sense of what you are currently researching and writing about?

My project is a history of the role of water management in the Anglo conquest of California. I focus on the San Joaquin Valley of California’s Central Valley to show how Anglo farmers, settlers, scientists, and engineers have rendered water into an object of knowledge, ownership, investment, and administration. My archival research begins in the mid-nineteenth century and concludes in the mid-twentieth century, but I’ve also engaged in some ethnographic research in and around Bakersfield in Kern County. This allows me to reconstruct a contingent history of water in the state beginning with swampland reclamation, advancing through canal irrigation, and concluding with the exploitation of aquifers. As Anglo settlers encountered unfamiliar peoples, climates, landscapes, and ecologies, water became a crucial site for developing different models of colonial settlement. Taken together, my research reveals how the seemingly neutral processes used to measure, monitor, monetize, and manage water in California often conceal histories of Indigenous dispossession, racial exclusion, and economic inequality.

Very interesting! How does your study of water management complicate or challenge our understanding of California history? 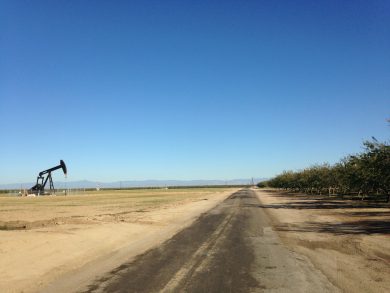 Kern County is simultaneously a leader in oil and agricultural production. Pictured here, a pumpjack faces an almond orchard.

Water issues are frequently cordoned off from the other major dramas animating California history. What I aim to do with this project is put water back into the picture by asking what role water administration has played in the Anglo settlement and development of the state. For instance, how has water management contributed to the dispossession and genocide of Indigenous peoples or the exclusion of racialized groups from immigration and land ownership? In one account, I describe how the movement to drain lands prone to perennial flooding in what is today Kern County was implicated in the first series of Indian reservations established in the state. In 1863, a work gang composed of California Indians living at the Tejón Military Reservation were hired by Colonel Thomas Baker, namesake of the city of Bakersfield, to excavate ditches, amass earthen levees, assemble rock dams, and build a headgate to regulate flows of water from the Kern River. Forced off their lands and onto reservations, these Indigenous peoples were now being coerced into back-breaking manual labor to reshape the landscape for private gain. Following certification from a state engineer and acceptance by the California legislature in 1867, Baker was issued a patent for 89,120 acres—the most expansive swampland reclamation scheme in California history. This retelling of water history can help us to appreciate how so-called swampland reclamation contributed to the transformation of territory into private property primed for agricultural production as well as the disciplining and dispossession of Indigenous peoples.

The language of water management, reclamation, and irrigation suggests an impartial and empirical effort to harness a critical natural resource, but your work demonstrates that this hydrological history is far from neutral and apolitical. How has water management policy, practice, and enforcement exacerbated racial and class inequalities? Could you give us an example from your research?

The two sides of this strategy functioned together to limit who could own what, who could work where, and under what conditions. In California, water has never been far from these concerns.

Much of the early debate by settlers and legislators in the state concerned how to establish a society in which free white wage labor and property ownership could go unchallenged. For example, in 1887 lawmakers passed the Wright Act, which enabled landowners to organize local irrigation districts that could construct infrastructure to divert water from rivers and distribute it to farms. Irrigation districts are a powerful mechanism that allows landowners to levy taxes based on the assessed value of their farmland, issue bonds to fund irrigation projects, and seize water rights through eminent domain. The Wright Act might appear neutral, or even banal, but during the same period in which the first irrigation districts were incorporated, Chinese and Japanese immigrants were being legally prohibited from owning farmland in the state. In other words, white farmers were being given access to credit to construct infrastructure that could significantly increase their agricultural productivity as well as the value of their property, while Asian immigrants were being forced into relations of dependency as farm and factory laborers.

If one side of the strategy of white supremacy in California involved limiting access to the ownership of productive property like farmland and factories, the other side of the strategy sought to demarcate and manage the position of racialized ethnic groups within a highly stratified labor market. The two sides of this strategy functioned together to limit who could own what, who could work where, and under what conditions. In California, water has never been far from these concerns.

Your research is very timely! California is experiencing record breaking drought. In March 2022, for example, 93% of the state was considered to be in severe or extreme drought. How does your research help explain and/or offer some insight into solving this drought crisis? 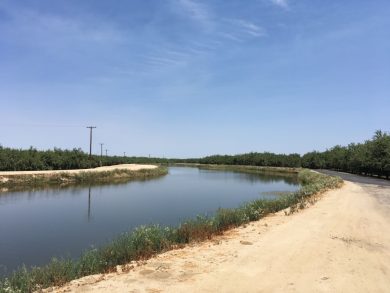 A dirt-lined canal constructed in the nineteenth century, which continues to deliver water from the Kern River to farms and irrigation districts in Shafter.

As drought is exacerbated by climate change, the future of aquifers in the state is one of the most urgent and hotly contested issues confronting Californians. In times of drought, the state relies on groundwater for more than sixty percent of its water supplies. Agribusinesses are the largest water users in the state and they must be held responsible for the devastation caused by their pumping practices. Their wells are drilled so deep and their groundwater pumping is so significant that entire towns in the Central Valley have been left without water and parts of the San Joaquin Valley are literally sinking in a geologic process known as subsidence. My research reveals that many of these practices date back to the nineteenth century and are surprisingly well understood by the worst offenders. With groundwater extraction, we have a situation in California that is very much like the multinational oil corporations who have known for decades that they are a primary contributor to global climate change, yet have done everything in their power to maintain a dependency on fossil fuels. For one hundred years, the agricultural industry in the Central Valley has known that their groundwater pumping is dangerously unsustainable, yet they continue to pump because no one is preventing them from doing so and there is still a lot of money to be made. Until the systems of discriminatory water rights and destructive water use I describe in my dissertation are seriously revised, or even better, reversed, the water problems plaguing California will continue to get worse. If there is one insight I hope to get across with this research, it’s that water regimes predicated on permanent growth from ill-gotten gains are incompatible with sustainable, healthy, and just futures.