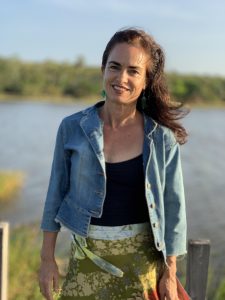 Ana Flecha is a PhD student in the Latin American and Latino Studies (LALS) Department at UC Santa Cruz. She analyzes the Brazilian “psychedelic religion” of the Santo Daime through the interdisciplinary perspective of dance studies. This research informs her broader interest in examining how twenty-first century relationships between culture, power, and knowledge are performed through moving bodies.

In October, we spoke more with Flecha about her ongoing research. Flecha received a UCSC SSRC Dissertation Proposal Development (SSRC-DPD) Fellowship in 2021-22. We discussed Flecha’s dissertation project, research methods, and her current research residence in Brazil.

Hi Ana! Thank you for agreeing to speak with us about your academic work. Can you tell us in a broad sense what you research and write about?

Thank you for the opportunity to share a little bit about my work. I am researching a danced ayahuasca religious practice from Brazil called the Santo Daime bailado. Ayahuasca contains the psychoactive component DMT (dimethyltriptamine) and is made from two plants known as the chacrona leaf and the jagube vine. Santo Daime was founded in the Brazilian Amazon forest in the 1930s by Raimundo Irineu Serra, known as Mestre Irineu, along with his companions, mostly poor migrants who moved to the Amazon in search of work. The name Santo Daime is translated into English as Holy Give-me, referring to the receptive quality of the practice in which learning and healing take place through ingestion of the daime tea, ayahuasca. Grounded in Indigenous knowledge, daime is also known as a master teacher in this lineage, the “professor of all professors.” Today Santo Daime is practiced in more than forty countries on all inhabited continents. I am researching what the practice of the Santo Daime bailado does for and through the people who practice it as individuals as well as socially, and ways the practice travels, especially as representative of Brazilian culture, history, and people.

You were a UCSC SSRC-DPD Fellow in 2021-2022. This program encourages scholars to conceive of their projects in an interdisciplinary way, and your project “The Santo Daime Bailado as Racialized and Gendered Psychedelic Religious Choreography” seems to do just that. How would you say your project is interdisciplinary?

I am framing my project as an intervention into the field of psychedelic science, which has been experiencing a great deal of growth recently as psychoactive medicines like ayahuasca are being decriminalized and mainstreamed. This growth is largely due to pharmaceutical interest in patenting these medicines for therapeutic use. The typical therapeutic model in clinical trials with psychedelics tends to isolate individuals from their communities, pathologize their symptoms, and subdue their bodies. They will usually be asked to lay down with eye shades on while one or two therapists sit and observe them. I analyze the therapeutic approach from the perspective of dance studies to reveal the power relations involved in this kind of choreography. The Santo Daime bailado comes from a different knowledge system than that of the field of psychedelic science even though it is based on the ingestion of a psychedelic plant medicine. It has been interesting to me to witness the gaps between these epistemes. For example, when I talk about the children and young people I have met in Brazil who practice Santo Daime, many of whom were born into the religion and practice with their families, other scholars are often surprised.

Your project sounds fascinating! The bailado appears to have an inseparable tie to ayahuasca and the Amazon. How has the right-wing populist administration of Brazilian President Jair Bolsonaro, who has rolled back protections for Indigenous people and accelerated mass deforestation, influenced the bailado as a religious and social practice?

That is a great question! Dr. Maria Betânia Albuquerque, an education scholar and psychedelics researcher, has described the forest as the cathedral for Santo Daime works (the Santo Daime ritual is referred to as a work, as in spiritual work.) Noting the essential nature of the tea to the practice itself, she associates the importance of the two plants from which the daime (ayahuasca) tea is made with concern for the forest as the natural habitat in which they grow. I hypothesize that the bailado is an extension of this spatial sanctification as choreography of the forest that travels, representing Brazil as Amazonian, and therefore, also ayahuasqueirian. In June of this year, ICEFLU (Instituto do Centro Eclético da Fluente Luz Universal), the organization through which most global expansion of Santo Daime is occurring, published an official letter of solidarity with Indigenous people of Brazil in repudiation of the legislative project PL 490 known as marco temporal, an infraction against Indigenous territorial rights brought forth by Bolsonaro’s administration.

…it has been amazing to witness how the bailado travels through the computer screen. Its rocking, swaying movement can be felt through this transmission…

Although works have been and continue to be suspended in many locations due to concerns for COVID-19 infection, major new online programming has emerged through ICEFLU that has connected people transnationally, providing opportunities to participate in all kinds of works, including the bailado. People who may never have been able to travel to the Amazon forest could suddenly participate in real time works and seminars with beloved elders who live there. This has also provided opportunities to share information and resources, increasing awareness about the political situation in Brazil, especially concerning the Amazon forest and Indigenous people. Although the shift to online works via Zoom obviously alters their spatial and temporal configuration in extreme ways, it has been amazing to witness how the bailado travels through the computer screen. Its rocking, swaying movement can be felt through this transmission, carrying messages of solidarity from the forest encoded in the choreography.

Finally, how did your exploratory research during the UCSC SSRC-DPD program influence the trajectory of your  project?

I started living in the Northeast of Brazil in 2009 before beginning my PhD at UCSC in 2018. When I returned for exploratory research through the UCSC SSRC-DPD program, I was amazed to witness the growth and solidarity that had emerged in the local Santo Daime community where I lived, especially among the young people. The pandemic had brought them together in new ways as most of their activities had already been outside, working on the church land where there is an agroforestry project including the chacrona and jagube plants, but also playing music together. The last time I had left there were a couple of instrumentalists in the community who would accompany the works. When I returned, I found a band of excellent musicians ranging in age from 9 years old up to 70. When I complimented some of the young people on their progress and their knowledge of the Santo Daime hymns, they responded that “there was nothing else to do.” The pandemic, along with a lack of governmental support, had inadvertently supported a new generation of musicians. This finding turned me more towards an inquiry into the roots of Santo Daime in Brazilian popular culture in new ways. The category of popular culture in Brazil is very broad, but within it, there is a lack of boundaries around the categories of religion, music and dance, as well as combinations of influences from Indigenous, African, and European cultures.