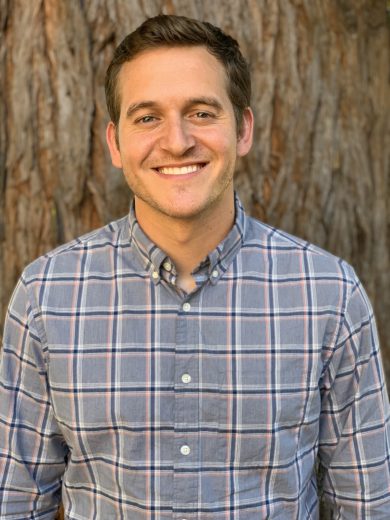 Jonathan Charles Paramore is a PhD student in Linguistics at UC Santa Cruz. Paramore’s research interests include phonological theory, phonetics, and the languages of Pakistan. In November, we learned more about Paramore’s ongoing work and summer research trip. Paramore received a 2022 THI Summer Research Fellowship to travel to the Khyber Pakhtunkhwa Province and collaborate with a native speaker of Mankiyali to conduct an acoustic analysis of the language’s stress system. We discussed Paramore’s experience working with native speakers and the relationship between linguistic studies and language preservation.

Hi Jonathan! Thanks for chatting with us about your ongoing research. To begin, could you give us a general synopsis of your dissertation project and how your summer research fits into it? 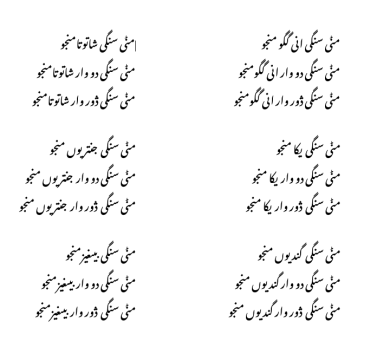 Example of the token sentences the participants read for the experiment (written in Urdu script since there is no writing system for Mankiyali).

My coauthor, Aurangzeb, is a native speaker of Mankiyali. We spent most of our time recording thirty different speakers reading a list of about 100 tokens embedded in carrier sentences. Each speaker was recorded twice. In all, we obtained about 6,000 tokens embedded in carrier sentences. For each token, we will use software to annotate the target syllable, marking the onset and offset point of each segment. Once we complete the annotations, we will proceed to run statistical analyses to determine what features of stressed syllables are significantly different from the features of unstressed syllables. The target tokens are designed to analyze and compare the physical correlates of syllables in both stressed and unstressed positions. Stressed syllables are often longer in duration, louder, have a higher pitch, and an expanded vowel quality when compared to unstressed syllables in the same environment. We are in the process of segmenting and annotating the data now and hope to have an initial analysis completed by the end of the Fall quarter. 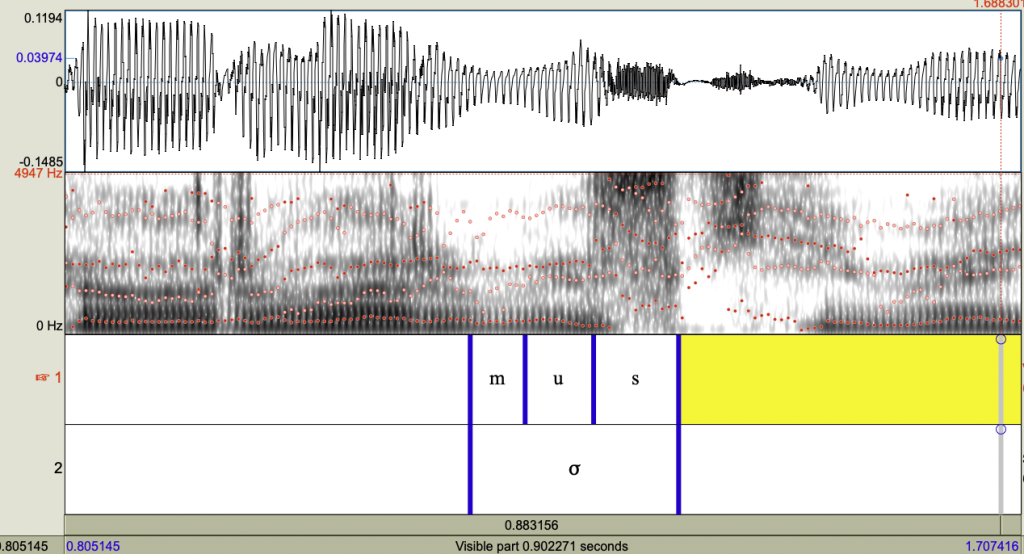 One of the target Mankiyali syllables annotated and ready for statistical analysis.

There are two main reasons why a linguist should always seek to collaborate with native speakers of a the language they are working on. The first reason, which is largely pragmatic, is that native speakers are experts in their language and, as such, are able to provide invaluable input into the design and implementation of experiments on the language. Working without a native speaker on a language is akin to attempting to do a puzzle in the dark. The second reason is ethical in nature. Namely, a language is generally considered to be the intellectual property of the community that it belongs to, so a linguist reaping the benefits of research on a language should seek to share those benefits with an interested native speaker if at all possible. There are many speakers of understudied languages that are brilliant but lack the educational opportunities to pursue this kind of research. A linguist has the opportunity to empower the native speakers by equipping them with the necessary tools to continue research on their language long after the linguist is gone. This often results in higher-quality research than would otherwise be obtainable. My coauthor, Aurangzeb, is the mastermind behind this project and possesses an intuitive meta-linguistic awareness of his language. I imagine that, if afforded the educational opportunity, he will continue to be a great linguist for years to come.

This summer, you also partnered with a local non-profit in Pakistan called the Forum for Language Initiatives. Can you tell us a little about the work that they do, and about the role you played in their organization this summer? Why were you interested in partnering with a local organization? 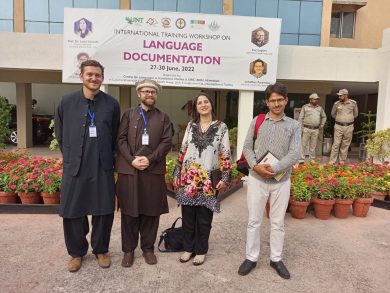 Paramore with other leaders of the language documentation workshop at Allama Iqbal.

The FLI is a wonderful organization that seeks to promote, preserve, and empower the speech communities of the indigenous languages of Pakistan. They conduct workshops to train native speakers to document and preserve their languages, and my role is to help in the training aspects of these workshops. Unfortunately, a workshop with the FLI didn’t end up materializing during my trip, but I was able to participate in another 5-day workshop held by the Centre for Language and Translation Studies in the capital of Pakistan at Allama Iqbal Open University, where I helped lead a training workshop on language documentation. There were about 40 participants consisting of professors, graduate students from universities around Pakistan, and other native speakers who came to participate. We taught the basics of using recording equipment, ethics, archiving data, what to record, etc. Many of the participants are mother-tongue speakers of endangered languages in Pakistan, and they were excited to learn techniques for preserving their languages. The workshop seemed to be a success, and it certainly raised awareness for the importance of language documentation in Pakistan. A couple of advisors to the Prime Minister even made appearances to promote the workshop.

In your experience working with the Mankiyali people, what is the relationship between language, status, and community self-perception? How does conducting linguistic studies of endangered languages support their preservation and revitalization?

When we conduct linguistic research on Mankiyali, the worth of the language is elevated in the community. Conducting research on languages that are undervalued demonstrates that it is just as valuable as any other language.

Unfortunately, Mankiyali speakers are an extreme minority in their region, and their language is heavily stigmatized. As such, the younger generation is rather uninterested in maintaining the vitality of the language, and it is beginning to decrease in use in favor of the dominant languages of the region, Hindko and Urdu. However, since we began working with the community in 2019, there has been a renewed excitement in the community concerning the importance of maintaining their linguistic identity as Mankyiali speakers. When we conduct linguistic research on Mankiyali, the worth of the language is elevated in the community. Conducting research on languages that are undervalued demonstrates that it is just as valuable as any other language. Hopefully, our continued research on the language will lead to increased perceptions of it as well as to sustainable revitalization projects.

Could you share a moment of surprise, joy, discovery, or wonder from your research trip this summer? 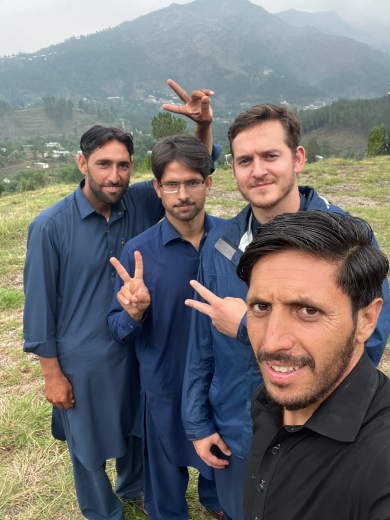 Paramore with collaborators (from back left to front right) Alam Zeb, Aurangzeb, and Muhammed Sajjad.

One of the most beautiful things about my research trip has nothing to do with the linguistic research I was conducting, but is more about the people I encountered. The Pakistani culture places incredible value in hospitality. No matter where I went and who I interacted with during my time in Danna and Domeka (the villages where Mankiyali is spoken), as well as the surrounding region, I was met with overwhelming kindness and generosity. My hosts worked tirelessly for the entirety of my time there to provide me with the best lodging and food they had to offer. Beyond that, the surrounding community was also quick to welcome me as their guest. Shopkeepers often tried to give me things for free because I was a guest in their community. This aspect of my trip left the largest imprint on me, and I hope my own hospitality practices will be influenced by it.