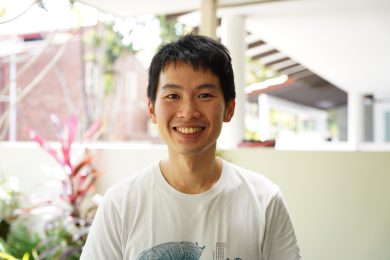 Joshua Tan is a PhD Student in the History Department. Tan’s research project “Migrants and Missionaries: Chinese Diaspora, Religion, and the Cold War” explores how the Cold War prompted and influenced the migration of Chinese Christians and others in the second half of the twentieth-century. His research raises important questions about national identity, displacement, and transnational cultural production.

In January, we sat down with Tan to learn more about his ongoing research. Tan was a 2021-22 UCSC SSRC-Dissertation Proposal Development Program Fellow. We talked about his exploratory research and the ways his experience as a SSRC-DPD Fellow opened up new avenues for conceptualizing his dissertation project.

Good afternoon, Josh! I’m excited to learn more about your research. To get started, let’s set up a general overview of your project. What time periods, places, and peoples anchor your study? What are the major historical questions and debates you engage with?

My project takes as a focal point the mid-twentieth century mass migrations that took place within and across China’s rapidly evolving borders. Amidst a turbulent period of war against Japan (1937-45), a civil war between the Nationalists and Communists (1945-49), and a Communist Revolution of 1949, people moved as they sought to cope with ongoing geopolitical transformations, and were compelled to make decisions which had long-lasting consequences. These decisions were especially consequential because of the emerging Cold War, which greatly disrupted existing networks of mobility, especially within the previously transnational worlds of maritime South China.

My project engages most closely with two bodies of literature, namely: (1) histories of the People’s Republic of China (PRC), and (2) histories of Chinese migration and diaspora. New histories of the PRC have made great strides in disaggregating a monolithic Party-state through bottom-up histories, but have not always paid attention to seemingly marginal spaces on the frontier or outside of Chinese state borders. I thus offer a view of the reverberations of the 1949 revolution from spatial margins; taking the vantage point of those transnationally mobile individuals operating outside of the borders of the PRC, whose perspectives have been overlooked with a focus on the state. This leads to my second intervention, which is in the field of Chinese migration and diaspora. Arguably, for a long time, this “field” did not even exist– as the end-point of assimilation meant that such histories would be subsumed into that of various nation-states. The emergence of this field in the 1990s– commensurate with the PRC’s marketization reforms– has stressed the enduring ties between ancestral villages, place-based organizations, and primordial Chineseness which endured over long distances, and oftentimes cast Chinse merchant capitalist as the key protagonists. Instead, I argue that ethnicity or race as an organizing principle is insufficient, and that more attention needs to be paid to the role of the Cold War and decolonization in structuring the shape of these networks.

The Chinese diaspora is a historical phenomenon that has long roots. Based on your study, what makes Chinese Christians leaving China during the Cold War a unique diasporic experience? How does this perspective, somewhat neglected in the literature, help us rethink the Chinese diaspora writ large?

My initial focus on Chinese Christians is one which has somewhat been subsumed within the broader category of what I term the “Cold War Diaspora.” I was first drawn to the experiences of Chinese Christians who left China in the period surrounding 1949, to some extent because of my own personal background– my two great-grandfathers were both emigre-Chinese pastors from South China who were part of the mid-century movement from South China to Malaya and Singapore. I thus became interested in how their stories– and those of their contemporaries– challenged existing narratives about migrations across maritime South China.

I thus became interested in how their stories– and those of their contemporaries– challenged existing narratives about migrations across maritime South China.

As historian Peter Hamilton has recently demonstrated, Chinese Christian elites, especially those educated in missionary institutions, possessed  social capital and personal networks with Western missionaries, universities and global mission boards; they consequently had immense resources at their disposal when considering where to go at a crucial moment. Undeniably, a majority of Chinese Christians elected to remain in the PRC and synthesize their faith with political realities in the new socialist state. However, of those who decided to leave China, their mobilities clearly reflect the multiple networks of which they were participants. For example, the Bishop Paul Yu Pin of Nanjing already had extensive ties with American military and intelligence during the 1930s and 40s, which eased his transition post-1949 to the United States and Taiwan. Popular revivalists and preachers like Calvin Chao (Zhao Junying) likewise were able to benefit from his relationships with evangelical educational and missionary institutions in determining his course of mobility from Southwest China to Hong Kong, Singapore, and then the United States. The same could be said about the many graduates of China’s Chrisitan Colleges, who decided to leave China and seek opportunities elsewhere, especially as educators in Chinese-language schools overseas.

While there have been some evidence that post-1949 exiles– as with many others facing similar trauma of dislocation– turned to religion as an anchor to cope with the socio-political transformations they encountered, my preliminary research has shown that many of the Christian or missionary-educated elites who left China did not solely work within Christian institutions or networks. On the contrary, in a process which parallels what historian Albert Wu describes as the transition of liberal missionaries from “Christ to Confucius”; rather than seeking to proselytize and make converts, they rather chose to affirm their role in preserving “Chinese culture” from the revolutionary iconoclasm of Communist China.

Over the last few years, there has been a lot of attention focused on China’s violation of the human rights of the Uyghurs, a Muslim minority in the nothwest region of Xinjiang. Does your research on religious minorities in China during the Cold War period offer any insights into this contemporary persecution and its representation in global media?

The contemporary politics surrounding the Uyghurs and other ethnic or religious minorities in the contemporary PRC is worrying, and one among many ongoing expressions of colonial violence. However, I think the trope of religious “persecution”– as it is deployed in the English-language media, especially in the United States– has unfortunately been wielded as a political tool by the Religious Right. The way such violence is discussed and represented in the media, thus, does not always do justice to the lived experiences of those who are caught within broader structures of power– both the trauma of those exiled abroad, and the coping mechanisms of those who have to remain, live and work under very different conditions within China. Returning to the Cold War 1950s and 60s however, I do think that there are strong parallels between the Cold War-era tropes of anti-communist moralizing, and contemporary representations of perseuctions and human rights abuses across the world, especailly China. As the historian and cultural critic Jini Kim Watson eloquently argues in the book Cold War Reckonings, the genre of “persecuted” literature, the search for “Asain Solzhenitsyns” for example, were necessarily produced by the conditions of global bipolarity and the emergent genre of anti-communism. The same discourse has been adopted by evangelical proponents of  Middle Eastern and African Christians, as Melani McAlister has written. Likewise for defenders of religious freedom today, for whom dissidents critiquing the Chinese state provide “authenticity” and legitimation for a hardline foreign policy on China. To be sure, I am no apologist for the repressive tactics of the current PRC regime. However, it would be intellectually dishonest to overlook the way in which exile narratives are produced and manipulated to speak to targeted audiences, and the political agendas which inform their construction. In other words, critically interrogating what work these stories do, are as essential as criticizing the empirical realities they reveal. On this issue, I have benefited from a recent issue on the website positionspolitics, which has helped frame my thoughts on these ongoing global representations of China, especially in light of ongoing crisis of anti-Asian racism, and Sinophobia in the United States today.

Are there particular document collections or archives that have been particularly useful to you in shaping your research agenda? Can you share one document or story that you think is very emblematic of the history you wish to write?

My archival research has been slowed by the closures and travel restrictions of the pandemic, but in the Fall of 2021 I was lucky to spend a few months commuting from Santa Cruz to Stanford’s Hoover Institute, to work with the files of the Asia Foundation. The Asia Foundation (TAF), covertly funded by the CIA, was a key actor in sponsoring educational and cultural activities within Asia. Its recently de-classified archives covering the 1950s and 60s, have been at the core of recent works about the “cultural Cold War.” One of my major discoveries was the central role The Asia Foundation played in international student and faculty exchange, particularly in networking “overseas Chinese” elites, whom they hoped would play a role in containing the influence of Communist China, and advancing American interests in Asia. For example, they were actively involved in recruiting faculty for various schools and emerging universities across Asia. Within “Cold War China,” the best known examples were the Chinese-medium colleges such as New Asia College in Hong Kong, National Taiwan University, Singapore’s Nanyang University, and multiple area studies centers in the United States. These histories have been situated within multiple local histories of Hong Kong, Singapore, Malaysia, for example, but not always connected as a part of a broader, transnational network which emerged during the Cold War. In recent times, scholars have found in these spaces of Sinophone literary and cultural production– on the margins of a hegemonic China and Chineseness– fruitful avenues for problematizing the nation-state through language. However, my research has found that such perspectives must also be contextualized to emphasize the role of colonial and American Cold War agency in shaping the direction of movements across space. By following the movements and circulation of individuals across these spaces, I instead foreground how the Cold War produced new forms of mobilities and networks.

Finally, I am curious how the SSRC-DPD program’s focus on interdisciplinarity has influenced your research thus far. Have you approached your archival exploratory research differently because of this focus on the interdisciplinary?

The SSRC-DPD program has definitely been formative in shaping the trajectory of my research.

The SSRC-DPD program has definitely been formative in shaping the trajectory of my research. The “peer-review” process of workshopping our proposals, as well as the opportunity to receive guidance from Professors Grace Delgado, Debbie Gould, and Kat Guttierez as a faculty mentor, was immensely helpful in helping me to clarify my methodological toolkit and approaches to the project. One of my key takeaways– working in conversation with scholars of literature, the social sciences and visual arts– was to think critically about the appropriate units of analysis in narrating history. Eventually, I was able to develop the “Cold War Diaspora” as an organizing concept, with smaller units or case studies in the individual chapters. There certainly is still much more room to explore narrative strategies, and scale up/or down as the research proceeds. But the wide-ranging scope of the workshop was very helpful– from practical suggestions for archiving and cataloging research data, to the more conceptual tools to help map my project.