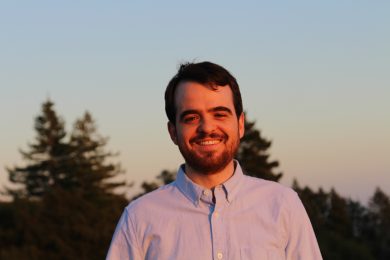 Philip Conklin is a PhD Student in the History of Consciousness Department. Conklin’s research explores a series of popular religious movements in the nineteenth-century Philippines that regularly conflicted with Spanish colonial authority. Ultimately, his research suggests we need to understand religious movements as powerful and legitimate forms of human agency and resistance.

In February, we learned more about Conklin’s ongoing research. Conklin was a 2021-22 UCSC SSRC-Dissertation Proposal Development Program Fellow and he credits this program for helping advance his research project in important ways.

Hi, Philip! Thanks for taking the time to discuss your ongoing research with us. Your study “Visionary Politics: Popular Religious Movements in the Colonial Philippines” sounds fascinating. Can you give us a synopsis of the larger research project?

Sure thing! My project centers on a group called the Cofradía de San José, a movement of lay Catholics that clashed with the Spanish state in 1841 and was violently repressed. The Cofradía was founded in the early 1830s and underwent a rapid expansion after its leader, Apolinario de la Cruz, experienced a vision of the Virgin Mary. Around 1840 they began petitioning the colonial authorities for official recognition, but it was denied. An initial confrontation occurred after the group were attacked while attempting to hold an unauthorized novena, a nine-day prayer meeting. In a second battle the Spanish defeated the Cofradía, capturing Apolinario and killing about 500 members. But the Cofradía continued to haunt the area, and around 1870 Apolinario appeared in a vision along with the Virgin Mary to a local resident, who subsequently re-formed the organization for a short time before this was also repressed.

A big motivation for my project is the discrepancy I see between these religious or spiritually articulated popular movements and the secular assumptions of the social sciences.

I use these events as an extended case study from which to explore the widespread historical phenomenon of popular resistance movements inspired by visionary religious experience. More broadly, as James Scott has argued, until the last couple of centuries subaltern struggles for power were almost exclusively articulated in a religious idiom. A big motivation for my project is the discrepancy I see between these religious or spiritually articulated popular movements and the secular assumptions of the social sciences. So one of my main questions is, how can we account for the prevalence of practices like the use of amulets, the belief in invulnerability, expectations of divine intervention, messianic prophecies, and so on, without assuming that we “know better” than the peasant insurgents who have continually employed them across regions and historical periods in their struggles against domination? For example, whether or not one accepts the ontological premise of the influence of immaterial beings (ghosts, spirits, angels, the Virgin Mary, etc.) in human affairs, one has to at least concede their presence on a phenomenological level—that is, they really do appear to people, and they really do get them to do things they otherwise wouldn’t. So my general approach is to try to take these kinds of things seriously, even where it challenges the ontological or epistemological groundings of the social sciences. The specific historical phenomenon of the Cofradía de San José serves as a grounding from which to try to approach these kinds of questions.

Why do you think the Philippines is such a rich site to investigate popular religious movements and their role in generating political resistance? What experiences or prior research contributed to your decision to situate your study in the Philippines?

I got interested in these kinds of supernaturally imbued peasant movements first, and then discovered that Philippine history is rife with such events. The book that really pushed me in this direction was Provincializing Europe by Dipesh Chakrabarty. Then I read a book called Pasyon and Revolution by Reynaldo Ileto, which examines a series of popular mobilizations of religious inspiration in the Philippines from 1840–1910. Part of Ileto’s book (I think the best part) is an account of the Cofradía, and I have been unable to stop thinking about it since then. And as I’ve gotten more and more immersed in literature on the Philippines, the reasons to focus on the region as a site for studying the relation between religion and politics seems ever more justified. In their more or less authoritative text book on the history of the Philippines, Patricio Abinales and Donna Amoroso say that the two most prominent features of Philippine politics are a prevalence of religious themes and a propensity to popular mobilization. Even in elite political discourse, the presence of the divine looms large, with elected officials crediting their successful campaigns to personal piety, the intercession of saints, and the like. So religion and politics are pretty intertwined at almost all levels of social life in the Philippines.

How does studying the history of religious movements and millenarian resistance to political domination help us expand and/or alter traditional understandings of human agency? Can this adjustment to the way we think about agency help us tackle the multiple struggles of the contemporary moment?

Well, that’s one of the main things I’m trying to figure out. What strikes me the more I read and learn is the flimsiness and contingency of the Euro-Enlightenment idea that humans are the only beings in the cosmos with agentive capacity, and the assumption of a mechanical universe devoid of spiritual significance. This comes into stark relief when you study a movement like the Cofradía, whose conception of agency was much more capacious than this. They not only interacted and transacted with a host of divine beings and forces, but had a much broader understanding of humans’ ability to affect the world than we do, believing, for example, that Apolinario’s blessing made them invulnerable to weapons. You see this kind of understanding reappear in similar movements throughout history—in other parts of Southeast Asia around the same time, in medieval European peasant struggles, and so on. So this way of understanding agency is hard to ignore unless you’re willing to dismiss the actions and beliefs of most of humanity.

It’s also worth noting that the repression of popular religiosity has been one of the major activities of the ruling classes throughout history. I argue that “disenchantment” should be understood less as a kind of natural and neutral progression from ignorance to knowledge, and more as a political strategy by those in power to subdue the aspirations and capacity for political action of those they dominate. By refusing outright to accept the ontological claims of these subaltern groups, academics run the risk of contributing to this disciplinary project. So instead of either ignoring them or explaining them away, I argue that we need to come to terms with these kinds of expansive notions of agency. Post-humanism is doing some of this work, as well as some secular studies scholars, scholars of folk-lore, and so on. This is part of the broader project I hope to continue. And to your question, I think this is particularly important in the present historical conjuncture. We are faced by such a daunting array of interlinked ecological-political-social crises that the capacity of human beings to effect change in the world appears forever foreclosing. At least it does to me. So I find hope at least in trying to think with these revolutionaries and dissidents who lived in a cosmos where their actions and the actions of the extra-human entities that they related with had the capacity to effect changes in the world and in themselves that appear fantastical to “us moderns.” But I think there’s something in these traditions that may be worth recovering considering that the monumental task of facing the current crises seems equally out of reach to our “normal” human capacities.

Much of your research is historical in nature, so that means you probably have visited or plan to visit some amazing archives! What document collections (or individual documents) have been particularly influential in shaping your research, and why? What would you say is the most rewarding and the most challenging aspect of archival research? 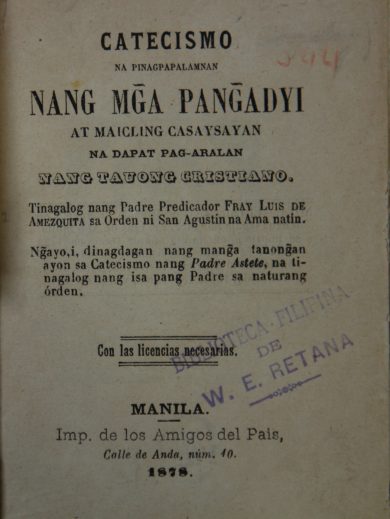 Catholic catechism in Tagalog, published in 1878

One reason for focusing on the Cofradía de San José is that it is relatively well accounted for in the archival records compared to similar groups. Studying the actions and beliefs of the lower classes is notoriously difficult since these are the groups least likely to have left behind a paper trail. In the case of the Cofradía, we have correspondences between the members, some of the devotional literature they used, lists of members, among other things. There are also some contemporary records of their repression written by the Spanish authorities. Often this latter kind of source is all that’s available on popular movements, so the fact that documents written and used by the members themselves have also survived is amazing. Most of these documents are at the National Archives of the Philippines in Manila, which I haven’t been able to travel to yet. But last summer I was able to spend some time at the Newberry Library in Chicago, which has an extensive collection of archival material from the Philippines. Most pertinent to my research are two accounts of the history and repression of the Cofradía written by the Spanish, but they also have tons of 19th century Catholic literature in Tagalog, which has also helped me try to reconstruct something of the religious life of the region in the time period I’m studying. 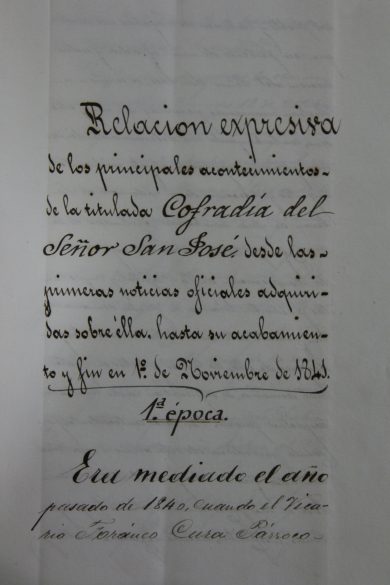 Title page of an account of the history and repression of the Cofradía de San José, composed by Manuel Sancho in 1843.

At this point frankly the most challenging aspect of archival research for me is the languages. My project requires both Spanish and Tagalog (the basis of the national language, Filipino). 19th-century Tagalog is very different from contemporary Filipino, so it’s been a lot of time spent with a dictionary struggling through these documents, which often also have all sorts of orthographic idiosyncrasies. Reading Spanish has been a bit easier, but tracking back and forth between the two languages has been a challenge. But despite this I’ve still been able to enjoy the process of discovery that comes with reading archival materials, which is the rewarding part. It’s also just a different and refreshing experience to do primary research, where you are able to hear from historical actors themselves without it being mediated through the interpretations of other scholars.

How have the exploratory research funds, workshops, and mentorship opportunities from the SSRC-DPD program facilitated your research progress?

Through my UCSC SSRC-DPD experience I feel I went from having a constellation of ideas resembling a research proposal to a coherent research project that I can pursue for the rest of my time in grad school.

The SSRC-DPD program funded my archival research this summer, which I wouldn’t have been able to do otherwise. This was a huge step forward in my dissertation project, and I was able to gather enough materials to keep me busy for a while. The DPD workshops were also instrumental in teaching me how to formulate my research project in a way that is legible to other scholars, funding organizations, and so on. I found the tiered mentorship structure really effective, where you have your work critiqued by fellow grad students, then the faculty workshops leaders, and finally by outside faculty. Through all these revisions I was able to develop my research tremendously. Through my UCSC SSRC-DPD experience I feel I went from having a constellation of ideas resembling a research proposal to a coherent research project that I can pursue for the rest of my time in grad school.