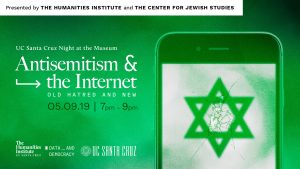 Recent shootings in the US and New Zealand have shown that internet technologies facilitate the rapid spread of bigotry and hatred that can spark violent terror attacks.

This year’s UC Santa Cruz Night at the Museum seeks to explore the relationship between these technologies and antisemitism. On May 9, The Humanities Institute presents Antisemitism and the Internet: Old Hatred and New, at the Computer History Museum in Mountain View, Silicon Valley.

“What is the relationship between anti-Semitism and the Internet? Is there something new about anti-Semitism today or is it just a continuation of old images and fears? How do social media platforms create environments for the viral spread of global anti-Semitism? Does the Internet deepen the conspiracies that lie behind anti-Semitism? And how can members of the tech community harness new technologies against such hatred?

“On Thursday, May 9, The Humanities Institute and the Center for Jewish Studies will present UC Santa Cruz Night at the Museum: Anti-Semitism & the Internet—Old Hatred and New, at the Computer History Museum in Mountain View, beginning at 7 p.m.

“Anti-Semitism has been called the world’s oldest hatred because it is grounded in much earlier forms of anti-Judaism that demonized Jews–sometimes literally–on religious grounds,” Deutch noted.

“Modern anti-Semitism, however, really originates in the 19th century and is made possible by a number of factors–most importantly, the emergence of race theory and the racialization of Jews; the dual emergence of modern capitalism and communism, for which the Jews are blamed; and the rise of modernity itself, for which the Jews are blamed as well.”

… Deutsch observed that in recent years, social media platforms have helped to create new forms of anti-Jewish hatred, as well as to magnify age-old propaganda and conspiracy theories. “One of my main concerns is that through clicking on links and belonging to certain social media networks, individuals–especially children and young adults who don’t even know what anti-Semitism is–may become exposed to it and may not be in a position to counter the false claims they’ve inadvertently come across,” said Deutsch.”

Learn more about this event by reading the full news post here, then join us on May 9 in Mountain View to discuss the ways that technology and antisemitism interact.

UC Santa Cruz Night at the Museum: Anti-Semitism & the Internet—Old Hatred and New
Thursday, May 9, 7:00pm
Computer History Museum in Mountain View (1401 N Shoreline Blvd)
Admission is free with RSVP and open to the public.

Antisemitism and the Internet is presented as part of the The Humanities Institute’s Data and Democracy initiative, a project of the Expanding Humanities, funded by the Andrew W. Mellon Foundation. Deutsch and Deblinger are co-directors of the Digital Jewish Studies Initiative at UC Santa Cruz.