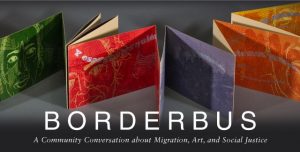 Join The Humanities Institute for Borderbus, a community conversation about migration, art, and social justice, with Juan Felipe Herrera and Felicia Rice on March 6th, 6:30pm, at Santa Cruz Museum of Art & History. 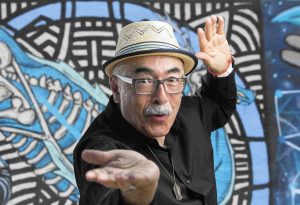 Juan Felipe Herrera is an artist, activist, and the 21st Poet Laureate of the United States (2015-2017). His publications, which span over 30 books in multiple genres, include the poetry collection, 187 Reasons Mexicanos Can’t Cross the Border: Undocuments 1971-2007 (2007), and most recently, his book for young people, Imagine (2018). The son of migrant farm workers and an activist for at-risk youth and indigenous rights, Juan Felipe Herrera centers and celebrates in his work the experiences of marginalized communities in the U.S. and abroad.

In this interview, current literature PhD student and poet, Nathan Xavier Osorio chats with Juan Felipe Herrera about the “sound-life” of performance, the joy of experiment, and how poetry helps us process national grief.

Nathan Xavier Osorio (NXO): The president and his administration recently declared a national emergency to allocate funds to further develop the wall on the U.S. – Mexican border. What role does poetry have in resisting or healing from the damage done to our national imagination by this and other similar government efforts?

Juan Felipe Herrera (JFH): Poetry, with the breath of the poet, the heart of her life, joined by millions, pushes forth with the creative forces bestowed upon us. A wall is a plaything before the positive. It will take time. Change comes — rumbling with letters and caesuras, chants, odd-angled rhymes and earthy people power.

Beauty, suffering, power and culture are all related. We cannot tear away from reality. It is better to live with all things, then to cut ourselves off and fester in a segmented mind. —Juan Felipe Herrera

NXO: Many of your poems make grief their center. Sometimes the source of this grief is public tragedy, like in “Poem by Poem,” dedicated to the memory of the victims of the 2015 hate crime in which nine black church goers lost their lives. In what ways, if any, do you think the act of writing, reading, or sharing poetry can help us process moments of national grief?

JFH: A poem can provide a flower, an unexpected friendship, a consolation, an acknowledgment, a bouquet of voices to be unfolded in a quiet moment or taken back to that church or elementary school, or synagogue where bullets burned through innocent bodies. A woman at a reading came to the stage where I had just finished with poems. She said, “Thank you, thank you for the poems you sent us and the ones your students emailed to Sandyhook. All of us were so thankful.” In these times, this is what it is all about. Compassion. Poetry is built for compassion. Those are its origins.

NXO: A follow up question! Considering poetry’s ability to respond to these kinds of emergencies, be it government-endorsed racism or national grief, do you think that the poet has a responsibility to work with this social and political material? Or is it enough for the poet to work towards creating beauty?

JFH: Beauty, suffering, power and culture are all related. We cannot tear away from reality. It is better to live with all things, then to cut ourselves off and fester in a segmented mind.

NXO: At a reading of yours I once attended, you played your harmonica alongside a reading of your poems. It felt like the music was a natural partner to the English and Spanish language. How do you understand the relationship between the music from the instruments you play and the music coming from your multilingual poetry? 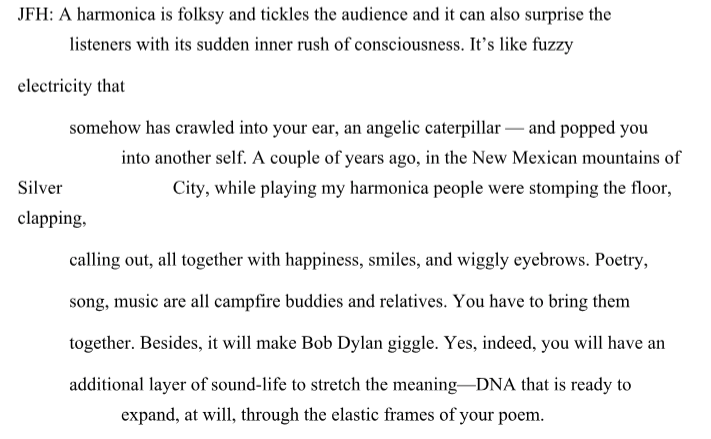 NXO: I’m fascinated by the way you seem dedicated to pushing poetry to its formal limits by remixing it and blending it with other art forms, like music or theatre. Are there any art forms or mediums that you haven’t had the opportunity to work with but that you’d like to work with in the future?

JFH: Experiment is the joy of a poem. It wants the crackly new. Each letter is available to party. Each sentence structure is always willing to jump into a new arrangement to surprise itself and its meaning systems. What will happen if you hammer away at language? At thought, knowledge, perception, the only thing that builds and sustains culture? Revolution and evolution, that’s what can happen. Since high school, I have been in love with all the nutty, elegant, deep, rogue, smoky, phosphorescent artists and writers of Europe — Artaud, Cocteau, Picasso, Dalí, Breton. Then I crashed into MesoAmerica, Africa and the First Peoples of Mexico and this hemisphere, into pyramid stone, sacred sand, feather and drum. Not to mention the installation artists of the early 20th Century and the Muralists of Mexico. Ground breakers, Frida Kahlo, Judy Chicago. We could go on. Poetry has gills and spears, spells and corn offerings, saxophones, tambourines and dinner tables — the sky liquid of a Jimi Hendrix guitar. Working with recycled cardboard poems these days, so save me those brown boxes — two steps from sculpture.

Poetry is built for compassion. Those are its origins. —Juan Felipe Herrera

NXO: And let’s end with a fun question. If you could have dinner with any poet, living or otherwise, who would they be?

JFH:
— Bhudda, I would bow and say Thank You, for the Dharma.
— Picasso, I would do what he did, make my hands appear like croissants on the table.
— Oh, and my mother, Lucha, I would thank her for her sweet-milk voice that forged me into who I am.

Join us for Borderbus, a community conversation about migration, art, and social justice, with Juan Felipe Herrera and Felicia Rice on March 6th, 6:30pm, at  Santa Cruz Museum of Art & History.

A wall is a plaything before the positive. —Juan Felipe Herrera