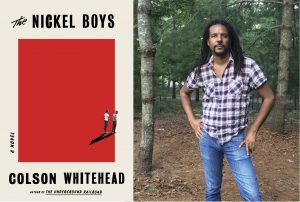 The Humanities Institute is thrilled to partner with Bookshop Santa Cruz to host Colson Whitehead, acclaimed author and Pulitzer Prize winner, reading from The Nickel Boys, at Peace United Church in Santa Cruz on September 19.

Rappaport writes: “The novel won both the National Book Award and the Pulitzer Prize, along with rave reviews from almost everyone. The New York Times Book Review described it as “stunningly daring.” NPR hailed it as “An American masterpiece.” Oprah Winfrey called it “heart-stopping.” And Barrack Obama said it was “terrific.”

“The Nickel Boys examines another slice of institutionalized racism in American history,” notes Rappaport, “this time told through the story of two boys at an abusive reform school in Jim Crow-era Florida. The novel is based on the true story of a reform school in the Florida panhandle that existed for more than a century and traumatized thousands of children.”

“With the recent passing of Toni Morrison, Colson Whitehead is perhaps the preeminent novelist of the black experience writing in America today.”

Rappaport speaks with Tyler Stovall, Dean of Humanities at UC Santa Cruz, who will be introducing Whitehead at the reading on September 19. Stovall states: “The Nickel Boys chronicles the depths of racism, carceral torture, and child abuse in modern America. As the nation commemorates the 400th anniversary of slavery, Colson Whitehead’s novel serves as a powerful reminder of the fact that the after-effects of black slavery lingered long after the Emancipation Proclamation, and in some forms are still with us today.”

In an interview with THI, Stovall elaborates: “As America marks the 400th anniversary of the arrival of the first slaves in America’s English colonies, and 400 years of African American history, Colson Whitehead’s work underscores the centrality of African slavery to the American experience, and calls upon us to consider and reconsider not just its beginnings but also its ends.”

Stovall adds, “With the recent passing of Toni Morrison, Colson Whitehead is perhaps the preeminent novelist of the black experience writing in America today.”

Read more from Rappaport, then join us on September 19 for Colson Whitehead at Peace United Church.

THI recently spoke with Dean Tyler Stovall about Whitehead’s fiction and the historical record. Read our interview with Stovall, before joining Stovall and Whitehead on September 19.