UC Santa Cruz doctoral candidate Lex McClellan-Ufugusuku appeared before the United Nations Permanent Forum on Indigenous Issues, exploring whether the people of Okinawa could be recognized as Indigenous—meaning they might have the right to block or stop new military bases under guidelines about Indigenous people set up by the U.N. 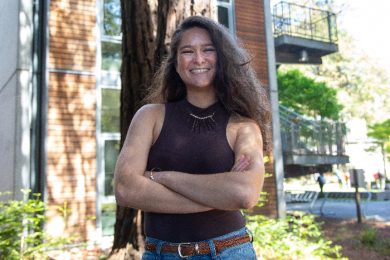 Lex McClellan-Ufugusuku came to UC Santa Cruz as an undergraduate specifically to work on the Okinawa Memories Initiative under the direction of History Professor Alan Christy. (Photo by Carolyn Lagattuta)

In April of this year, UC Santa Cruz doctoral candidate Lex McClellan-Ufugusuku sat in front of the United Nations Permanent Forum on Indigenous Issues and described how the construction of a new U.S. military base in Okinawa was being undertaken despite its environmental problems and against the strong objections of those who live on the island.

Her statement rose out of her doctoral research into the complexities of the small island with big strategic significance located in the East China Sea. Now ruled by Japan, the island is home to 32 U.S. military installations to which many Okinawans object, according to McClellan-Ufugusuku. If, however, the people of Okinawa were to be recognized as Indigenous, they might have the right to block or stop the presence or expansion of these facilities under guidelines about Indigenous people set up by the United Nations, said McClellan-Ufugusuku. It’s a tricky situation. 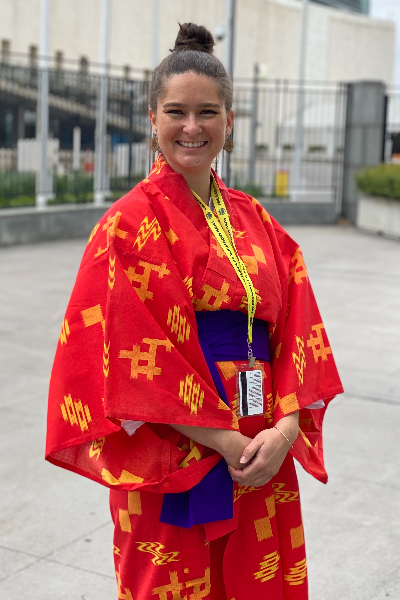 McClellan-Ufugusuku is mixed-race Shimanchu, a descendant of those who live on the island of Okinawa.

Born in San Diego, McClellan-Ufugusuku (College Nine) came to UC Santa Cruz as an undergraduate specifically to work on the Okinawa Memories Initiative under the direction of History Professor Alan Christy. The initiative explores and documents the early years of the U.S. military presence on Okinawa. Earning a bachelor’s degree in history and critical race and ethnic studies in 2018, McClellan-Ufugusuku went on to graduate school on campus.

Speaking by phone, McClellan-Ufugusuku said she was driven in her research by thoughts of her obaachan (grandmother), Michicko Cappalla Oshiro.

“She has a basic education that she got during the U.S. military period in Okinawa,” said McClellan-Ufugusuku. “She told me stories about running into the sugar cane fields on her way home from school so she could hide and read before she had to go home and do her work.”

Arriving in the U.S. in the 1980s, McClellan-Ufugusuku’s grandmother labored her whole life, holding onto her heritage and pride in being Ryukyuan (Okinawan) despite the fact it would have been easier to be assimilated into the American culture, McClellan-Ufugusuku said.

Combining the study of government documents along with conducting oral histories of Shimanchu both in Okinawa and in the diaspora, McClellan-Ufugusuku said her doctoral research explores not only how the Shimanchu culture and language are slipping away “in light of ongoing Japanese assimilation policies” but also how that leads to environmental harm to her ancestral land.

Telling the story of the contested relocation of the Marine Corps Air Station Futenma to Henoko Bay in Okinawa, McClellan-Ufugusuku spoke of the damage to coral reefs and how the remains of Okinawans killed during the 1945 Battle of Okinawa have been discovered in the dredged soil slated for use as landfill.

“Our ancestors are being made into a runway and we will never get them back… They have been killed twice,” McClellan-Ufugusuku said.

The bases—there are 13 on the island—also have contributed to the presence of possibly carcinogenic chemicals in the drinking water near these sites, she said. A 2019 study by two Kyoto University professors, for instance, found high levels of PFOS (perfluorooctanesulfonic acid) both in the blood of citizens and in rivers near a U.S. air base. The chemical was used in fire-extinguishing foam. Crimes committed by U.S. soldiers on the island are another problem, McClellan-Ufugusuku said.

If Okinawans were recognized as Indigenous, however, they might have rights under the U.N. Declaration of the Rights of Indigenous People to have access to their land without fear of military violence and also to have a voice in whether new installations can be built, she said. Still, many older Okinawans object to being called Indigenous because of how the term was used to exclude people in the past and was seen as shameful, McClellan-Ufugusuku said.

The thousands of people who are part of the Okinawan diaspora, especially the young, see it as a struggle for their rights, however.

The importance of her research is about “survivency,” said McClellan-Ufugusuku, who appeared at the U.N. as the lone representative of the Ryukuan people. “Survivency means reclaiming our history, our cultural practices, and our languages.”

McClellan-Ufugusuku’s appearance before the U.N., said Professor Christy, was an example of
the 26-year-old’s bravery in pushing through anxieties about being in uncomfortable situations in order to do what is needed, a character trait he has seen throughout her years at UC Santa Cruz. It’s also how McClellan-Ufugusuku has been able to create a global network of Okinawans and their descendants as part of her research.

Her focus on a small place that has global significance is important, Christy said. “She is working on a key issue that is at the heart of everything that will become of increasing significance” in the years ahead.

Meanwhile, McClellan-Ufugusuku has undertaken another role at UC Santa Cruz. Besides teaching, she is also head coach of the women’s lacrosse team on campus, a squad that is ranked No. 5 in Division II of the Western Women’s Lacrosse League.

Read a graduate profile of McClellan-Ufugusuku by The Humanities Institute.