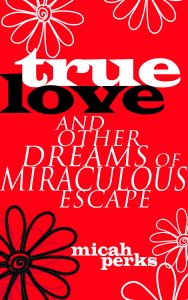 Micah Perks is Professor of Literature and Co-Director of The Creative Writing Program at UC Santa Cruz. She is the author of two novels, We are Gathered Here and What Becomes Us, and a memoir, Pagan Time. In this interview a current creative writing PhD student, Thaïs Miller, talks with Perks about teaching at UC Santa Cruz, Perks’ writing process, and her latest book.

The Humanities Institute is proud to cosponsor the launch of Micah Perks’ new short story collection, True Love and Other Dreams of Miraculous Escape, on Tuesday October 23rd, at Bookshop Santa Cruz.

Thaïs Miller (TM): What is it like to teach creative writing at UC Santa Cruz?

Micah Perks (MP): So great. I love the students, both undergrad and grad. I also love my colleagues in creative writing—we are all friends together. I’ve been working in the creative writing program for 21 years, so it’s kind of been a life’s work. The biggest changes for me have been the new Creative-Critical PhD, which is a lot more work, but so exciting and satisfying to work with brilliant students. And now, my sister in crime, Karen Tei Yamashita, is retiring this quarter. We arrived together 21 years ago, and our partnership in teaching fiction together has been very much like a marriage. So, a page is turning.

TM: How would you describe the relationship between teaching and writing?

MP: It’s challenging. Teaching literature and graduate classes is generative for my work in the long run, but in the short run, it’s hard to work on a novel when I’m teaching. I can work on shorter pieces, stories and essays, during the quarter. Sabbaticals and summers are good for working on books.

Micah Perks: When I began writing memoir, I felt blocked because it felt hard to share personal details and emotions. I imagined I was telling my stories to a lover, and that allowed me to create an intimate voice. I think I’ve carried that technique of creating intimacy with the reader into my fiction and essays. When I write memoir, I always check with the people I’m writing about—I show them a draft and often incorporate their point of view into the memoir. The only real people I write about in fiction are historical people, like Houdini or Sarah Winchester, so I don’t have to show it to them.

TM: How would you describe your writing process for your latest short story collection, True Love and Other Dreams of Miraculous Escape?

MP: I wrote the stories in between book projects over a fifteen-year period. Then, when I decided to make a book, I thought I should link them up. I wanted a more cohesive book, and I also realized there were too many similar but not the same people recurring in the stories. Like, why is there a bald Chilean professor in one story, an Argentinian scientist in another, but they both have the same smile and behave in the same way? So, I made them the same person, which then meant everyone else in the stories needed to be the same. It was a Rubik’s Cube (which I could never do). I also changed the locations so it all took place in Santa Cruz. When I thought [the book] was done I sent it to two writer friends. They told me it was brilliant. I then sent it to my editor, who said it was about half done. I wrote back, “Ugh.” But I ended up agreeing with him. If I was going to link them up, I wanted to go all the way, link every story. The linking took about six months of my sabbatical.

TM: You’re touring True Love throughout the country this month. Are you excited for your book tour?

MP: I’m very excited, though a little nervous about the hither and thither travel plans. I’m really excited about the Bookshop Santa Cruz reading because it will feel like a party.

Micah Perks: Get a medical degree or marry a rich person. Kind of joking. My advice is to enter the literary conversation in multiple ways. Send your work out, but also interview writers, write reviews, start a series or a literary magazine. Create community.