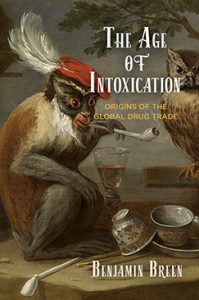 In The Age of Intoxication, Breen offers a window into a time when drugs were not yet separated into categories—illicit and licit, recreational and medicinal, modern and traditional—and there was no barrier between the drug dealer and the pharmacist.

Read an excerpt of Breen’s first monograph below, then check out THI’s Profile on Breen to learn more about his research and the Drug Histories and Futures cluster.

Introduction: At the Statue of Adamastor

O reckless people . . . you have breached what is forbidden!
—Adamastor to Vasco da Gama, Os Lusíadas, 1572

“In a city known for its spectacular vistas, one place in Lisbon stands out: a small patch of grass and stone called the Miradouro do Adamastor. It is sleepy during the day, frequented mostly by tourists and the occasional stray cat eager to take in its panoramic views. But as the sun sets over the Tejo River, revelers from the city’s nightlife districts crowd the south end of this tiny plaza. Dealers in MDMA, hashish, and cocaine begin to ply their wares. By nightfall on a typical Friday, the Miradouro do Adamastor has become one of the busiest drug markets in Portugal.

The north end of the plaza is very different. This side is dominated by an elegant building that happens to house Lisbon’s Museum of Pharmacy. One spring evening several years ago, I watched an intoxicated man climb on top of the stone statue that stands at the center of the plaza, his back to the museum. “Lisbon doesn’t care about me!” he shouted in Angolan-accented Portuguese. The people behind the statue pretended not to notice. With time, however, the tall iron fence that divides the museum from the plaza began to seem to me like a statement in its own right. The fence proclaims the museum’s symbolic and physical distance from the drug dealers and drug users beyond: the scientific realm of the medical, standing apart from the messy world of intoxication.

And as for the statue at the center of it all? The sculpted figure, rising out of rough-hewn rock, is an imperial Portuguese imagining of an African demigod. In The Lusiads, the sixteenth-century poetic epic of the Portuguese Empire, Adamastor is the name given to a giant who battles the navigator Vasco da Gama. As da Gama and his men round Africa’s Cape of Good Hope, a “deformed and enormous” figure rises in the night air “like a second Colossus of Rhodes, most strange to see . . . its hair curly and filled with earth . . . its mouth black.” Adamastor, the “Spirit of the Cape,” tries and fails to repel the Portuguese from reaching the “strong and potent drugs” of the Indies. Today, Lisbon’s Adamastor stands frozen in an expression of futile rage, staring out to sea. A tiny figure of Vasco da Gama perches on the edge of his beard.

It would be hard to find a better starting point for the stories told in this book. The African god and his Portuguese enemy, united in their silent contemplation of a gateway to the Atlantic Ocean. The drug sellers below, often recent immigrants from Brazil, Angola, or Mozambique, whose personal journeys map onto the older pathways of Portugal’s vanished empire. And, looming behind them, the silent wall dividing the street drugs of the miradouro from the medical drugs of the museum.

The Age of Intoxication argues against this division. It is a window into a time when there was no barrier between the museum and the marketplace—or between the drug dealer and the pharmacist. Here the reader will encounter merchants, slaves, shamans, prophets, feiticeiros, inquisitors, witches, alchemists, and natural philosophers. I don’t claim that these figures all saw themselves as participating in the same profession, trade, or worldview. On the contrary, the global drug trade emerged out of conflict and difference. It was, and is, rooted in a spectrum of beliefs that are difficult to draw together. A random selection of opinions held by individuals in this book would include the following: Eating the powdered flesh of an Egyptian mummy may cure the plague. Distilled poppies reduce melancholy. A Turkish drink called coffee increases alertness. The arterial blood of a murderer is the best thing for an epileptic, especially when collected and drunk immediately after the murderer’s public beheading. Tobacco cures cancer. Possessing an enemy’s toenail clippings may allow you to kill them.

It is a window into a time when there was no barrier between the museum and the marketplace—or between the drug dealer and the pharmacist.

The global drug trade was an emergent property, born of a ferment of different beliefs, practices, and conflicts, following a course that was neither planned nor expected. But I believe that it is important to try to see the drug trade as a unified whole. In the early modern era (the period spanning roughly 1500 to 1800 CE) the drug trade became truly global in scope—and the world changed in ways both familiar and forgotten. This book’s title, The Age of Intoxication, is a deliberate provocation in this regard. It has fallen out of fashion for historians to refer to an “Age of Reason” in the late seventeenth and eighteenth centuries, but the term continues to resonate in the popular imagination. I argue that the globalization of drugs during the same period was an event with impacts on global health, material culture, and intellectual life that were arguably even more transformative than the unevenly distributed intellectual currents of the Enlightenment. Rather than limiting this book to the study of only medicinal drugs or only recreational ones, I have thus chosen to study psychoactive and medicinal drugs in tandem so as to better capture the full scope of their impacts.

The substances we will learn about fall into different categories today. There are pharmaceuticals like quinine, so-called “traditional remedies” like St.-John’s-wort or rhinoceros horn, New Age and homeopathic cures, food-like drugs or drug-like foods such as sugar, and illegal narcotics like heroin. In chronicling how these substances circulated during the first era of globalization, it became clear that the permanence of such divisions—between illicit and licit, recreational and medicinal, modern and traditional—is illusory. These boundaries were radically different in the past, and they are shifting beneath our feet today. In order for people of the present day to guide drug policy toward a fairer and more informed course, we first need to understand who and what set it on its present trajectory.

The chapters that follow trace the drug trade’s emergence on a world stage, the main points of contact and conflict that key early modern drugs initiated, and the accompanying backlashes. For instance, the Atlantic slave trade was not just a trade in human beings but also a commerce in psychoactive drugs. The Scientific Revolution, likewise, was partially inspired by questions about how novel “Indies” drugs acted on mind and body, and what latent “virtues” they concealed. The shape taken by globalization was forever altered by this early modern era of drugs. In understanding the age before the pharmacy museum and the recreational drug market became separated by physical and ideological walls, we will learn more about how the modern world itself came into being—and about the age of intoxication that we still live in.”

The Age of Intoxication: Origins of the Global Drug Trade will be released by the University of Pennsylvania Press on December 20, 2019.