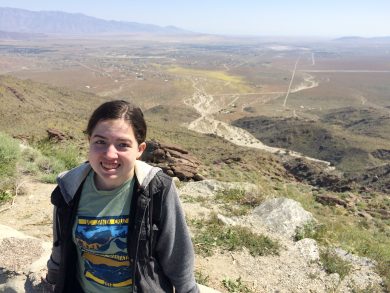 Michael’s research focuses on the significance of Irish women in the independence struggles of the early twentieth century. Part of her research involves making a website to highlight the role of women in these struggles, particularly as seen through paintings. Along with pursuing an Intensive History major, Michaels has worked with public history organizations at UC Santa Cruz like the Okinawa Memories Initiative (OMI) and the Center for Jewish Studies.

In January, we learned more about Michaels’ ongoing research and coursework.

Good afternoon, Sage. Congratulations on your recent THI awards! Can you give us a general idea of your research project “The Overlooked Women of the Fight for Irish Independence?”

For my project, “The Overlooked Women of the Fight for Irish Independence,” I am working to create a website to showcase the importance of women in both the 1916 Easter Rising and the Irish War of Independence. England first invaded Ireland in 1169 and began ruling all of Ireland in 1536. Ireland became part of the United Kingdom and was under British rule from January 1st, 1801, until December 6th, 1921, at the end of the Irish War of Independence. Starting in the 19th century, there was a growing desire for Ireland to become a sovereign nation as the Irish felt that the British were an oppressive, occupying power, and the Easter Rising was an effort to overthrow that power. My project highlights the critical significance of women in the Irish pursuit for political independence, thereby challenging the common prevailing notion that this historical event was dominated by men.

The website will provide visitors with a multimedia experience to educate them on the history of an important, but often overlooked, group of women. Women were seen as less suspicious than men by the British and thus, many republican women worked as spies. The extent to which Michael Collins was reliant on intelligence to win the Irish War of Independence, much of which was gathered by inconspicuous female clerical workers with access to secret files in British government offices, is still under-appreciated because history remembers gunmen and martyrs more than it does secretaries and spies. While the Easter Rising was ultimately a failure for the Irish rebels, it had a lasting impact on Ireland. It set the stage for the Irish War of Independence, which began in 1919 and culminated in an Irish victory in 1921. All but six counties of the island became an independent nation no longer under the control of the British. Because the British executed Irish rebels who participated in the Rising, it was a significant moment in the fight for Irish freedom. To this day, the martyrdom of the men who were fighting for the freedom of their country is regarded as the initiation of the crucial phase in the fight for Irish independence. Ireland has had large celebrations to commemorate the anniversary of the Easter Rising. Both the Rising’s 50-year and 100-year anniversaries are excellent moments to examine the extent to which the women who played a large role in the Rising have received the recognition they deserve in both official commemorations of the events and popular memory.

What drew you to researching the women who participated in the struggles for Irish independence in the early twentieth century?

In the winter of 2021, I took Professor Thompson’s exit seminar on modern Irish history, where I first learned about the Easter Rising and the Irish War of Independence. Much of the history of the Irish revolutionary period is focused on the men involved, such as James Connolly and Michael Collins. Countess Constance Georgine Markievicz is the only woman who is frequently mentioned in regard to revolutionary activity. This is understandable because she was a founding member of the women’s republican revolutionary group, the Cumann na mBan, and was arrested for her involvement in the Rising. However, she was far from the only woman involved in the fight for independence. I explored the role of Countess Markievicz and two other women, Dr. Brighid Lyons Thornton and Margaret Skinnider, during the Easter Rising and I am excited to learn more about their and other women’s roles in the Irish War of Independence. 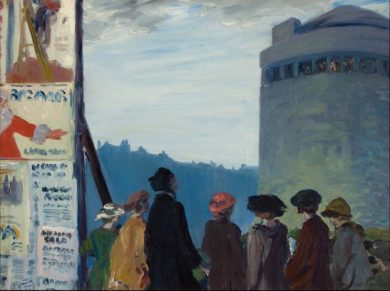 Your research has a really exciting digital component. Can you tell us more about your plan to develop a website that showcases your research? Why did you decide to incorporate this digital dimension into your work?

Jack B. Yeats’ painting, “Communicating With Prisoners” (1924) is what inspired me to have a website as a part of this project. The painting depicts some of the 700 women who were held in the Kilmainham Jail for their involvement in revolutionary events during the first quarter of the twentieth century. History has overlooked these revolutionary women to such a degree that when the poet Thomas McGreevy wrote about the painting, he assumed the prisoners were men, and Yeats wrote to him saying that they were women. Through the website, I will be able to make a virtual exhibit that highlights the paintings and photographs that are so important to understanding the role of women in the fight for Irish Independence. I think having a multimedia project is the best way to showcase the importance of women when it comes to Irish independence in an engaging manner. The variety of sources and media forms will be capable of reaching a wider audience than a research paper on its own. Additionally, a website will cater to a larger range of learning styles than just a paper could.

You were also an Undergraduate Research Fellow in 2020, and worked on documenting the institutional history of the Okinawa Memories Initiative (OMI) at UC Santa Cruz. One of the exciting parts of history is finding unexpected connections between places, peoples, and times that do not at first appear closely related. Have you found any of these unexpected connections that link Okinawa and the OMI to Irish independence movements?

I think my work with Irish independence is very similar to what the Okinawa Memories Initiative does. We are both trying to draw attention to underrepresented groups in history. I often compare Ireland and Okinawa because they are both islands with incredibly rich histories and continuing fights for independence. Some of Ireland is still under English rule, and while Okinawa is no longer under the rule of the United States, the U.S. military presence there very much seems like a continuing occupying power. Both Ireland and Okinawa are filled with incredibly resilient individuals who deserve to share their stories.

I believe the THI Research Fellowship will be very informative for figuring out what I want to do once I graduate in the spring.

I’m sure you get questions similar to this one often, so thank you in advance for indulging me! How have your experiences as a THI Undergraduate Research Fellow shaped your plans for your future here at UC Santa Cruz and beyond?

I believe the THI Research Fellowship will be very informative for figuring out what I want to do once I graduate in the spring. Having the opportunity to build a website is very exciting, and I think it will help me in deciding if I want to pursue digital humanities once I graduate. Getting to explore a topic I enjoy is also an excellent opportunity in that it could become the focus of a dissertation if I decide I want to pursue graduate school at some point.