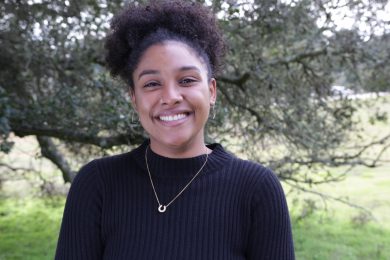 Farrah Safari is a fourth-year Literature and Sociology double major whose research project, “The Grey Area: An Examination of International Civil Rights Struggles in Korea and Vietnam,” was a recipient of a 2020 THI Undergraduate Research Fellowship. Her project focuses on the untold stories of civil rights struggles in war-stricken countries such as Vietnam and Korea and how war has a destructive domino effect.

We spoke with Farrah this week about her journey as a writer, breathing through the stress of the pandemic, and the wonderful organizations she’s been a part of at UC Santa Cruz.

Farrah and other THI Undergraduate Fellows will be recognized at the Humanities Spring Awards on June 5, 4:00pm, on Zoom. RSVP to join us virtually for the celebration.

Your research project was called The Grey Area: An Examination of International Civil Rights Struggles in Korea and Vietnam. When and why did you choose this research topic?

I realized the pen is far mightier than the sword— one allows the user to end a life whilst the other provides a chance to reanimate communities and breathe new wonders into the world.

Although I officially began my research project during fall quarter, my interest in the United States’ involvement during the Korean and Vietnam War began in spring quarter of 2019. I took a course on the “Forgotten War” with my current faculty advisor Christine Hong, and was completely awestruck at the devastation and land degradation that occurred on international soil. I realized war has a domino effect—unresolved conflicts pile up against each other, causing systems to collapse and nations to fall over. Hence, the struggles of the Korean War transmitting into the Vietnam War. The idea of suffrage “spilling” across time and geographical borders prompted me to dig deeper into asymmetrical warfare during the 1950s. This landed me in the realm of international Civil Rights struggles.

With tremendous help from Christine Hong, I learned about the political and social ramifications of international warfare. Many actors affected by these tragedies exist off screen. Even during the Vietnam War, one of the most documented wars in history, individuals such as the comfort woman and mixed Afro-Asian child, received minimal coverage. The reason I delved into this research is because I wanted to expand on the ideas and theories about war during the 1950s taught by Christine Hong as well as shine a light on individuals who have been buried in the dark for decades.

Looking back at your time at UC Santa Cruz, can you tell us about a few highlights? Any challenges you’ve worked through? How have your academic goals shifted during this time?

The highlights of my time in college revolve around the people I have met within the last four years. From friends who provide endless support and motivation to faculty members and lecturers who have given great guidance to my communities and organizational groups who have built me a home away from home. My journey here has been molded by some spectacular individuals. I don’t think there is a word in the world that can describe how grateful I am to have met each and every one of them.

Writing is hard work, and is a skill that requires strength, vulnerability and a lot of courage.

Nevertheless, some of the challenges I faced revolved around the sphere of writing. Every author is plagued with doubt about their talents and abilities. Whether you specialize in fact, fiction, research, poetry or even journalism, we are handed this internal struggle about the validity and quality of our words. Not only have I faced many battles with writer’s block, the inability to produce content no matter how close the deadline, but with writer’s doubt, the voice inside your head telling you to quit. Within university, I realized the voice is purely internal. It is a man vs. man conflict in which we have to battle our inner selves to prove we are worth the words we produce. I learned that this voice, although exceedingly annoying, is a marker that you’re a writer. Writing is hard work, and is a skill that requires strength, vulnerability and a lot of courage. I began to work through the doubt when I realized the pen is far mightier than the sword— one allows the user to end a life whilst the other provides a chance to reanimate communities and breathe new wonders into the world.

What about your life outside of school? What do you do to help you to feel whole?

Outside of the classroom I like to keep myself politically and socially involved. As I stated previously, I am lucky enough to be a part of amazing communities and organizations that have provided me a home in Santa Cruz. City on a Hill Press, UC Santa Cruz’s newspaper of record, allowed me to discover my passion for truth telling, as well as teach me that 3am editing sessions are the perfect place to bond with your org members. African Student Union introduced me to most of my closest friends. Facilitators for Race and Ethnic Diversity at AARC gave me the opportunity to advocate for underrepresented groups and explore my identities. Apart from my UC Santa Cruz activities I also like to write poetry, draw and watch Netflix with my housemates.

We are nearing the end of a unique school year in the history of UCSC. How are you coping in this current moment, both in terms of your academic life and daily life? What do you do to try to stay focused and sane? Any tips for your fellow undergraduates or questions you are asking yourself now, about the future or otherwise?

A quote that constantly keeps me motivated is by poet Sandra Cisneros: “We do this because the world is a house on fire and the people we love are burning.”

Breathe. That is my greatest piece of advice I can give to anyone entering, exiting or remaining in college. Amidst a pandemic, a lot of outside forces whether it be family members, faculty and professors or social media, are trying to persuade individuals to be active during this time. They urge college students to make use of the world slowing down by picking up new skills or side hobbies/hustles. We have this need in our society to keep performing and advancing, so we can achieve long desired goals. We then push said goals to the side as soon as they are completed, rarely giving ourselves time to be proud of achieving the objective.

My advice would be to stop for a moment. Take a deep breath and look at the surrounding world. We are enduring an event no one in our lifetime has gone through. We are not supposed to know how to act or what exactly to do. If we have the ability and privilege, we should give our bodies and minds the much needed break they deserve. The goal is to not feel guilty about taking a break and a simple breath.

For individuals entering the university after the pandemic, I also encourage you to breathe. You will face a lot of obstacles in your three to five years, but believe that you can conquer each and everyone of them if you have passion and resilience. A quote that constantly keeps me motivated is by poet Sandra Cisneros: “We do this because the world is a house on fire and the people we love are burning.”

Farrah Safari will be celebrated along with other THI Undergraduate Fellows at the Humanities Spring Awards on June 5, 4:00pm, on Zoom. RSVP to join us virtually for the celebration.