Unrest: Gender, Chronic Illness, and the limits of Documentary Visibility

THI’s The Body, (Anti)Narrative, and Corporeal Creative Practices research cluster presents Unrest, a Sundance award-winning documentary by filmmaker and activist Jennifer Brea. Unrest, which screens on February 19th, 2020, at the Del Mar Theater in downtown Santa Cruz, traces the story of a PhD student at Harvard who is afflicted by a sudden illness that leaves her bedridden. 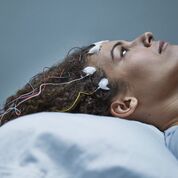 “We are very excited to be hosting award-winning filmmaker and disability activist Jen Brea,” says Irene Lusztig, Professor of Film and Digital Media at UC Santa Cruz and a Principal Investigator of the research cluster, along with UC Santa Cruz Professor of Literature Micah Perks and Associate Professor of Anthropology Megan Moodie. “We are especially excited that we are able to hold this event downtown in a community space that we hope will make this event accessible to a wide range of Santa Cruz community members.”

The film examines the extreme change and pain that many sufferers of CFS (Chronic Fatigue Syndrome) experience. Says Lusztig, “Brea has done incredibly important visibility work—both through her filmmaking and her broader activism—to draw attention to the politics of chronic illness, medical misogyny, and sick activism.” Lusztig underlines the activist nature of the film. “Unrest is a critical work that asks us to think about what it means to make a film while bedridden (much of the film is literally made from bed) and to consider the structural difficulties that make political organizing uniquely challenging for those of us who live with chronic illness.”

The film will be followed by a discussion between filmmaker Brea and research cluster co-lead Megan Moodie, who states that the discussion will focus on “what’s happened since the movie: [Brea’s] activism, and her remission.”

A long-time follower of Brea’s work, Moodie unpacks the power and politics of Brea’s film in Film Quarterly (Summer 2018). As Moodie writes in the review, excerpted here, chronic illness–especially feminized chronic illness–and its treatment by the medical establishment is thoughtfully brought to the fore in Brea’s documentary:

The breath in the dark is a message.

This is what I think, immediately. I know what it is, that sound: the quick inhalation, the holding, the sucking-teeth sound of a difficult exhale. If you have never lived with a chronic illness or pain, the opening moments of Jennifer Brea’s new documentary Unrest (2017), in which one is greeted by only a black screen and the sounds of effortful breathing, present an interesting mystery: what is this woman doing? But I am in on the secret, even without an image. Some daily task has presented itself as a Herculean challenge and a woman is at the edge of her physical boundaries, trying to finish the walk or get to the couch or simply, sometimes, ride it out.

Jennifer Brea, the woman breathing in the dark, suffers from myalgic encephomyalitis (ME), also known as chronic fatigue syndrome (CFS). Unrest is the story of her diagnosis and partial recovery: part detective story, part autobiography, and part documentation of an illness-based social movement.

Narratively, it follows Brea, a Ph.D. student at Harvard as the film begins, when a strange and serious viral illness leaves her weak and exhausted, with worsening neurological and physical symptoms such as periodically losing the ability to speak and walk, particularly after physical exertion. After many visits to many specialists (ending at Princeton Hospital, in the town where Brea now lives with her husband, Omar Wasow), Brea is finally told that she has ME and is one of the small number of people who are severely incapacitated by the disease.

While Unrest definitely falls within the autobiography/memoir tradition of documentary, it is not all about Jennifer Brea. While conducting research on her own worsening symptoms, Brea learns that she is not as unusual as she has been led to believe: “My disease isn’t rare at all,” she says. One million people in the United States suffer from ME; women comprise 85 percent of them. Moreover, it is not a new condition, having made large-scale, episodic appearances throughout history as “fever epidemics.” As Brea traces a piece of this history, she keeps her eye on the dismissive—sometimes downright violent—treatment of women by the medical establishment when faced with unknown diseases and disorders that affect women more than men and that do not have obvious or simple causes. 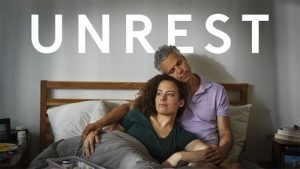 Brea’s research also uncovers a huge on-line community of ME sufferers, largely connected through socialmedia sites such as Facebook, whose lives are also spent largely indoors, in bed. With the connectivity of video and Voice over Internet Protocol (VoIP) sites and an iPad, Brea is able to make contact and develop relationships with some of these people and their families. Thus, Unrest documents the emotional, legal, and medical struggles of a handful of people in the United States, United Kingdom, and Denmark, culminating in footage of the “Millions Missing” day of action on May 25,2016, organized to bring awareness to ME.

…Viewers and commentators, including Brea herself, have located the film’s feminist politics in its exposure of the medical system’s misogyny and disregard for women’s bodies and complaints of illness. Unrest casts much-needed light on the cascade of frustration, sadness, and anger that most women and non-traditionally gendered people have experienced as they interface with doctors and the medical system.

As a woman of roughly the same generation, who is also an academic and also suffers from understudied illnesses that impact my daily life in profound ways, I locate the film’s feminist intervention both in its critique of medicine and in the way Brea is able to tell the story of her illness with vulnerability and ferocity in equal measure. Unrest represents a refusal of “the sick woman role,” an impossible position in which a woman is both entirely responsible for her own health issues (which are usually deemed to have a psychological cause) and is considered no longer to be a functional adult capable of meaningful thought or action due to illness and/or physical disability—and therefore unable to tell the truth about her own body.

Neither macho survivor nor feminized victim, Brea turns her ME into politics and art.

Read the rest of Moodie’s review at Film Quarterly. (UCSC affiliates can gain institutional access by logging in.)

The Body, (Anti)Narrative, and Corporeal Creative Practices cluster presents a film screening of Unrest on February 19th, 2020, at the Del Mar Theater in downtown Santa Cruz. The event is free and open to the public and RSVP is appreciated.