Barry Lam, Associate Professor of Philosophy at Vassar College and host of the story-driven philosophy podcast Hi-Phi Nation, will launch a residency at UC Santa Cruz on April 11. 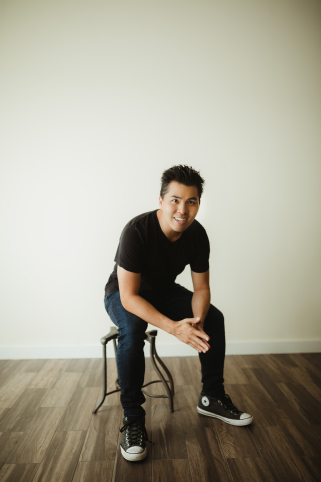 Lam is the third THI Scholar in Residence to come to the Humanities at UC Santa Cruz, following Robin Coste-Lewis in 2018 and Tony Michels in 2017. We are thrilled to partner with the Center for Public Philosophy to bring Lam to campus as he invites new ideas and questions through a range of public events, informal gatherings, and classroom visits.

Join us to continue the Data and Democracy conversation with Lam as he presents, “Fighting the Future: The Philosophy of Predictive Algorithms in Criminal Justice” on April 11 from 3:15 – 5:00 pm in Humanities 1, room 202. Lam will address different stages of the criminal justice system, from policing, bail hearings, and sentencing, where computerized algorithms are replacing human decision-making in determining where to police, who to arrest, who goes to jail, and who goes free. This talk will introduce how these algorithms work, the under-appreciated moral problems with their implementation, and how the future of criminal justice depends on decisions we make now about the risks we are willing to tolerate for public safety.

Ahead of his visit, THI talked with Lam about the urgency of public scholarship, his podcast, and what philosophy can bring to the question of technology and justice. Read the interview below, then join us on April 11.

You’re a public-facing scholar, with a popular philosophy podcast, Hi Phi Nation, and many other activities that bring philosophy to public (and podcasting to academic) audiences. Why do you think it’s important to carry out your scholarship in a public-facing way?

The Humanities generally, and philosophy in particular, are institutionally not in a very positive place. With the exception of the most elite and wealthy institutions, enrollments, majoring, funding, and departments across the country are shrinking, a long-term trend that has sharply accelerated in the last decade since the economic downturn. At the same time, demand for humanistic and intellectual content generally among the public in non-institutional contexts is surprisingly high, with user and amateur-generated content on YouTube, podcasting, self-publishing forums like Medium, and online media regularly garnering larger audiences. When the public is given high-quality content, they engage. It is important for those of us inside institutions who have the aptitude or talent for public engagement to do so both because we as trained scholars have a lot to provide, and because it is important to the health of our fields that your average parent, teenager, and media consumer have an assumption that your work is valuable.

Have you always thought about your scholarship as a public endeavor, or was there a moment when it became apparent to you that this was the best approach for you?

I did not think of my work as a public endeavor whatsoever until I started Hi-Phi Nation, and even then I didn’t think of it as “my scholarship”. I had assumed, like everyone else in academia, that scholarship is one thing, and public-facing work is something completely different. To this day I can’t shake that distinction. It wasn’t until maybe a few months into making the pilot episode that I thought about what I was doing as something scholarly, because I was learning a lot and putting things together (narrative journalism and philosophical ideas) that had not been put together much before. And it is only with the occasional episodes, like the one about Wishes of the Dead, and like this season’s episodes on predictive algorithms in criminal justice, that I feel that I am doing scholarship, because after investigating certain stories in depth, I’ve come to philosophical conclusions about the subjects of those episodes.

Your talk here at UC Santa Cruz will focus on the moral problems of algorithms and the links between algorithms and criminal justice. What is it about philosophy that you think can bring the issue of technological advancement and justice to the public in a way that is relevant to them?

I think advocates for technological advancement in criminal justice and the activists who push against it come from very different starting points. That starting point is rooted in their trust or mistrust of the institutions that design or implement the technology, like Silicon Valley, the Department of Defense, federal and local law enforcement. One side wants to improve on human fallibility, and sees every problem as an engineering one requiring technical solutions. The other sees problems as historical ones rooted in power and oppression, and technology in that context is just another weapon against the vulnerable. To the extent that these are the starting points, I don’t think the dispute is tractable, in the end it is only going to be about which side garners the most political power to get their way. That’s a terrible way to proceed, because we’re talking about major policy changes in state institutions of violence, the most morally weighty decisions we have as citizens. Instead, I think these decisions need a kind of justification coming from more fundamental moral and epistemological principles that everyone shares, and that everyone can see are at risk, when we turn to predictive algorithms to make decisions about who to arrest and incarcerate. I think that once the public can see the basic principles underlying the employment of these technologies, they will be able to decide for themselves whether they are consistent with their own sense of justice.