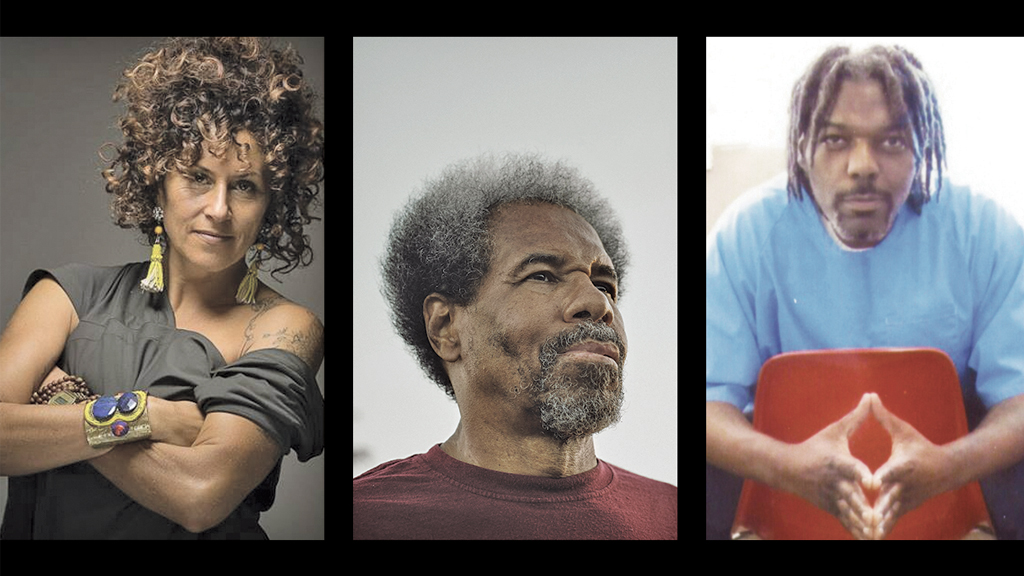 Abolition from the Inside Out w/ jackie sumell, Albert Woodfox, and Tim Young

The Institute of the Arts and Sciences is pleased to partner with the Legal Studies Program to present jackie sumell, Albert Woodfox, and Tim Young. Award-winning artist jackie sumell works collaboratively with people incarcerated across the U.S. to promote abolition. Albert Woodfox is an activist and author who spent decades in solitary confinement at the Louisiana State Penitentiary. Tim Young is a poet and activist currently on San Quentin’s Death Row and sumell’s collaborator on UC Santa Cruz’s Solitary Garden. Together, they will discuss the activism and collaborations taking place between people inside and outside of prisons to, as sumell puts it, “imagine a landscape without prisons.

Visualizing Abolition is a series of online events organized by Dr. Rachel Nelson, Director, Institute of the Arts and Sciences and Professor Gina Dent, Feminist Studies. The events feature artists, activists, and scholars united by their commitment to the vital struggle for prison abolition. Originally, Visualizing Abolition was being planned as an in-person symposium. Due to the ongoing pandemic, the panels, artist talks, film screenings, and other events will instead take place online. The events accompany Barring Freedom, an exhibition of contemporary art on view at San José Museum of Art October 30, 2020-March 21, 2021. To accompany the exhibition, Solitary Garden, a public art project about mass incarceration and solitary confinement is on view at UC Santa Cruz.

jackie sumell is a multidisciplinary artist inspired by the lives of everyday people. Her work speaks to both traditional artist communities and those historically marginalized by structural racism. sumell’s work has been exhibited extensively throughout the US and Europe. Her residencies and awards include 2017 Blade of Grass-David Rockefeller Fund Joint Fellow in Criminal Justice, 2016 Robert Rauschenberg Artist-As-Activist Fellowship, 2015 Eyebeam Project Fellowship, and 2008 Akademie Solitude Fellowship. An ardent public speaker and prison abolitionist, sumell has lectured in Colleges and Universities around the US including UC Berkeley (BAMPFA), RISD, ZKM Karlsruhe, and as keynote for the National Prisoner Advocacy Conference 2014. sumell began the Solitary Gardens project to honor the legacy of political prisoner Herman Wallace, who was held in solitary confinement for over 40 years and with whom jackie corresponded and collaborated for 12 years. Her collaborative work with Herman Wallace, The House That Herman Built, is the subject of the Emmy Award Winning documentary Herman’s House, screened to a national audience on PBS in 2013. sumell’s work explores the intersection of creative practices, mindfulness studies, social sculpture, and the principles of The Black Panther Party for Self Defense.

Albert Woodfox is an activist and the author of “Solitary,” a 2019 National Book Award finalist. Known as one of the Angola Three, along with Robert King and Herman Wallace, Woodfox served nearly 44 years in solitary confinement at the Louisiana State Penitentiary. He was released in 2016. Woodfox was a committed activist in prison, he remains so today, speaking to a wide array of audiences, including the Innocence Project, Harvard, Yale, and other universities, the National Lawyers Guild, as well as at Amnesty International events in London, Paris, Denmark, Sweden, and Belgium.

Timothy James Young is a writer, activist, and a wrongfully convicted prisoner on Death Row. He was arrested in April of 1999 for a crime that he did not commit and was subsequently sentenced to Death Row in April of 2006. He is now partaking in the Appellate process as a means of proving his innocence and regaining his freedom. Tim is a collaborator in Solitary Garden, a participatory public sculpture and garden project by award-winning artist jackie sumell. The sculpture follows the blueprint of a 6’x9’ U.S. solitary confinement cell similar to the one that Tim has been confined to for twenty-one years. The cell is surrounded by a garden which Tim designed via letters and drawings to students and volunteers, who cultivate it as his proxies.Tim’s writings have been featured in the San Francisco Bay View National Black Newspaper.