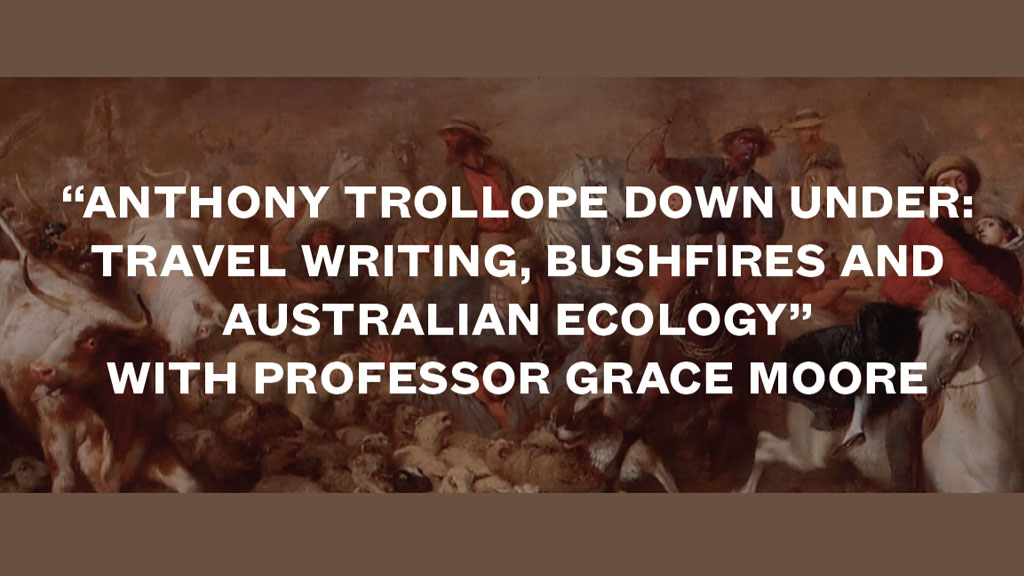 The Friends of the Dickens Project invites you to participate in “Anthony Trollope Down Under: Travel Writing, Bushfires and Australian Ecology with Professor Grace Moore.” The three sessions will offer the Friends a chance to examine Victorian responses to the environment, with a particular emphasis on Australia. The first session will involve a presentation on Professor Moore’s current research, which is on representations of bushfires and wildfires in nineteenth-century settler literature. The project is informed by both the environmental humanities and emotions theory and she will talk a little about these approaches. As part of this session, she will introduce some of the work she has done on Anthony Trollope’s travels (especially his representations of fire and environmental issues). We will also spend some time thinking about how Trollope positioned himself as a successor to Dickens, as both a novelist and travel writer.

The second and third sessions will be discussions of Trollope’s wonderfully melodramatic Christmas story Harry Heathcote of Gangoil (1874). The novella is set in Australia and draws on Trollope’s own experiences down under. It’s a remarkable work for the depth of emotions that it conveys, but also for how it captures the uncanny and threatening qualities that settlers saw in the Australian bush. Professor Moore has chosen Harry Heathcote because it presents an aspect of Trollope’s writing that is often forgotten, but also because it raises a number of fascinating issues including migration, race and climate change, which will, she hopes, lead to some lively discussions.

Grace Moore is an Associate Professor of English at the University of Otago, Aotearoa/New Zealand. She is the author of Dickens and Empire and The Victorian Novel in Context, and her edited works include (with Michelle Smith), Victorian Environments. Grace’s most recent publication is a special issue of the journal Occasion, entitled Fire Stories. She first attended the Dickens Universe as a graduate student in 1998.

This event series is presented by the Dickens Project.