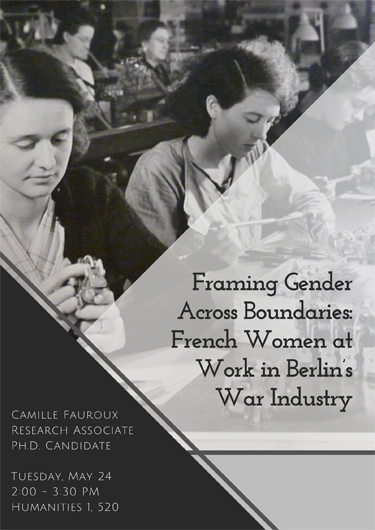 During the Second World War, 50,000 to 100,000 French women chose to leave France to work for the war industry in Germany. Their transnational experience points to the racial and gendered division of labor that deployed itself throughout Nazi occupied Europe. In an attempt to sustain the war effort while limiting German’s women’s draft and preserve their status as mothers and housewives, the National-socialist state chose to rely on the forced labor of millions of foreign men and women from occupied territories who where brought to the Reich. Drawing from a case study on the high-tech electronic industry in Berlin between 1940 and 1945, I reveal how French women’s “voluntary work” became more and more coerced as the war went on. Segregated housing in camps ensured a tight control of these workers as well as it prevented them from founding families on the German soil, but it also provided unexpected space for solidarity and resistance to forced labor.

Camille Fauroux is a doctoral candidate at the Ecole des Hautes Etudes en Sciences Sociales in Paris. This year, she is a visiting research associate at UC Santa Cruz. Her dissertation, under the supervision of Prof. Laura Lee Downs, examines French women’s labor in National-socialist Germany between 1940 and 1945. Her research interests include forced labor, migration, sexuality, and the transnational construction of gender.

Light refreshments will be provided.