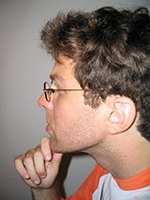 David Landy: “Explanation and Personal Identity in the Appendix to Hume’s Treatise”

In the Appendix to his Treatise, Hume famously expresses a deep dissatisfaction with the account of personal identity that he had earlier presented, but offers only the briefest description of what his concern is. Scholars working on this problem have presented a wide variety of suggestions of what Hume might be thinking. I will argue that such scholars have largely overlooked an important clue: the fact that Hume twice presents the problem as one with any theory that purports, “to explain the principles, that unite our successive perceptions in our thought or consciousness.” The key here, I will suggest, lies in understanding Hume’s notion of explanation. The two most prominent accounts of Hume on explanation lie at the extreme ends of an interpretive spectrum, and are both philosophically and exegetically untenable. The first is that scientific explanation aims at nothing more than subsuming particular observations under inductively-established universal generalizations. The second is that Hume makes explanatory appeals to certain substances and causal powers that we cannot in any way represent, but to which we can nonetheless refer. The first gets right Hume’s insistence on the connection of explanation to experience. The second gets right that it is the universal regularities of experience that stand in need of explanation, not that do the explaining. So, I will present a new account of Hume’s understanding of explanation that takes these successes and failures into account, and will show that this interpretation perfectly predicts everything that Hume finds wrong with his account of personal identity.

David Landy is an Associate Professor in the Department of Philosophy at San Francisco State University. He works primariy on the history of Modern philosophy, especially Hume and Kant, and also has interests in German Idealism and the work of Wilfrid Sellars.