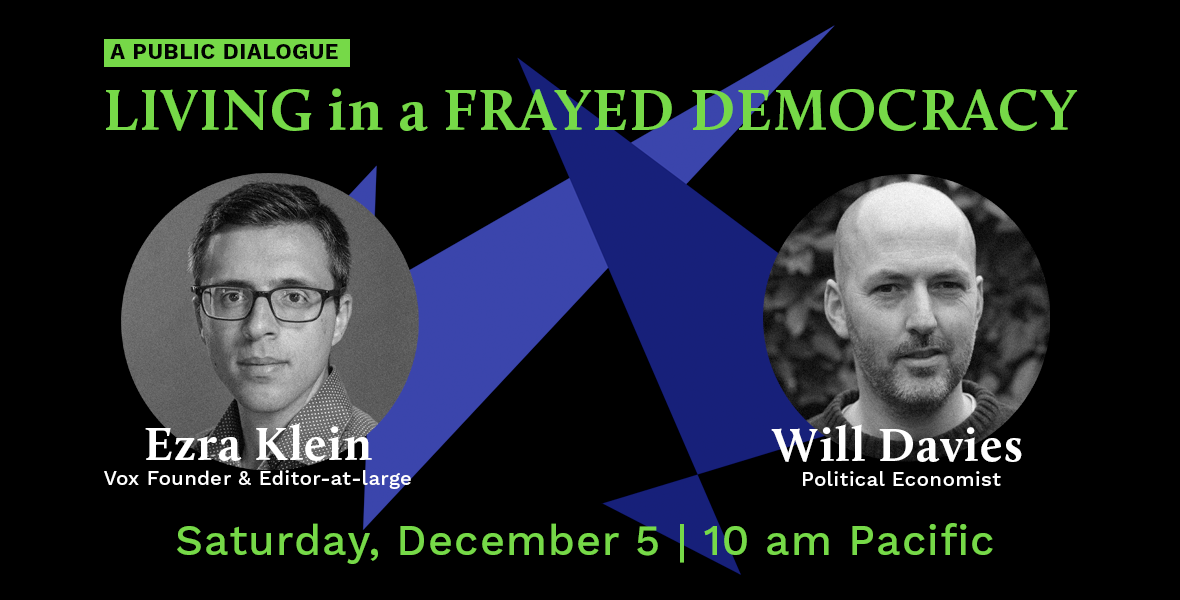 Ezra Klein and Will Davies: Living in a Frayed Democracy

We’re all impacted by this deeply polarized moment. How do we navigate life while political and cultural divisions are dangerously amplified and the world’s oldest democracies are under threat?

The Humanities Institute at UC Santa Cruz is honored to announce a trans-Atlantic political dialogue for this year’s Peggy Downes Baskin Ethics Lecture. We’ve invited two of our top cultural and political thinkers—Ezra Klein and William Davies—to help us grapple with how we got here, why we live in such fraught times, ways the US and UK are analogues in this fractious moment, and where we might go from here.

Ezra Klein is the editor-at-large and founder of Vox, the host of the award-winning podcast, The Ezra Klein Show, and the author of the best-selling book, Why We’re Polarized. Before that, he was columnist and editor at the Washington Post, a policy analyst at MSNBC, and a contributor to Bloomberg. He’s written for the New Yorker and the New York Review of Books, and (most importantly) is a UC Santa Cruz alumnus.

William Davies is Professor of Political Economy at Goldsmiths, University of London. He is author of several books, most recently This Is Not Normal: The Collapse of Liberal Britain and Nervous States: Democracy and the Decline of Reason. He is a regular contributor to the London Review of Books and The Guardian, and has also written for The New York Times, New Republic and The Atlantic.