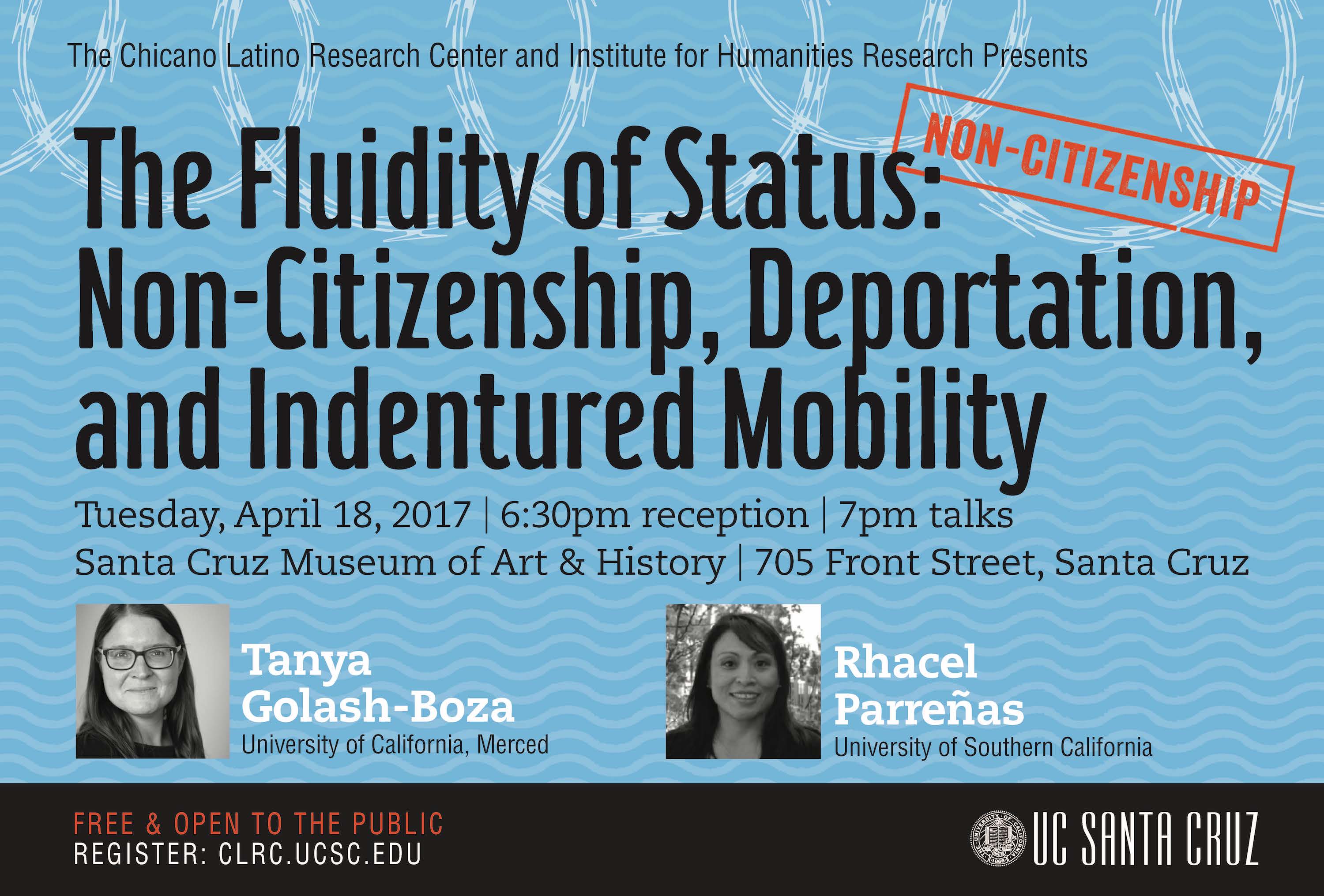 The Fluidity of Status: Non-citizenship, Deportation, and Indentured Mobility: A Conversation with Tanya Golash-Boza and Rhacel Parreñas 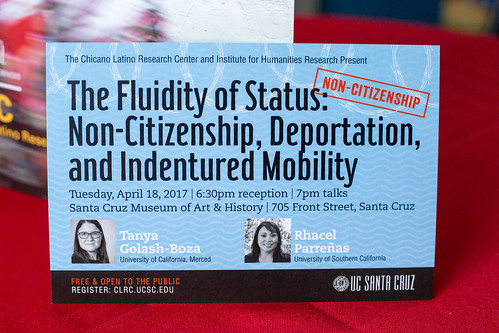 Since 1996, five million people have been deported from the United States – 98% of them Latin American and 90% men. Laws passed in 1996 made it easier to deport legal permanent residents, even those eligible for citizenship. In immigration proceedings, you have no right to legal representation. You can be detained without bond. You can be deported without a full hearing. In this talk, Tanya Golash-Boza will explain how legal permanent residents can be deported from the United States with minimal or no due process.

Across the globe, migrant domestic workers are unfree workers whose legal residency is contingent on their continued employment as live-in workers with a designated sponsor. Rhacel Parreñas’ talk gives a global overview of the exclusionary terms of their belonging. It then interrogates dominant theoretical frameworks for thinking about contemporary unfreedoms – slavery, human trafficking and structural violence – and proposes the alternative concept of “indentured mobility,” which sees migration as simultaneously constituting of financial mobility from a life of poverty in the sending society but at the cost of servitude vis-à-vis a sponsoring employer in the receiving society. The concept of indentured mobility foregrounds not only the severe structural constraints that limit the options of domestic workers but also their agentic negotiations for improving their work conditions and maximizing thepossible gains in their state of unfreedom.

This event is free and open to the public, but attendees are kindly asked to register in advance.

Tanya Golash-Boza is the author of five books, including Deported: Immigrant Policing, Disposable Labor and Global Capitalism (New York University Press, 2015), which explains mass deportation in the context of the global economic crisis; Due Process Denied (Routledge, 2012), which describes how and why non-citizens in the United States have been detained and deported for minor crimes, without regard for constitutional limits on disproportionate punishment; and Immigration Nation (Paradigm, 2012), which provides a critical analysis of the impact that US immigration policy has on human rights.  In addition, she has published over a dozen articles in peer-reviewed journals on deportations, racial identity, and human rights and has written on contemporary issues for Al Jazeera, The Boston Review, The Nation, Counterpunch, The Houston Chronicle, Racialicious, The Chronicle of Higher Education, and Dissident Voice.

Felicity Amaya Schaeffer is Associate Professor of Feminist Studies and Co-principal Investigator of Non-citizenship, UC Santa Cruz’s Andrew W. Mellon Foundation Sawyer Seminar.  She is the author of Love and Empire:  Cybermarriage and Citizenship across the Americas (New York University Press, 2013), an exploration of the relationship between global shifts and intimate circuits of desire, love, and marriage.  Her current research is on surveillance technologies and the sexual criminalization of migrant bodies on and beyond the US-Mexico border.  Other research interests include borderlands and transnationalisms; affect and capitalism; race, technology, and subjectivity; and Chicana and Latin American cultural studies.

This free, public event is co-sponsored by the Chicano Latino Research Center and Institute for Humanities Research, with generous support from the Andrew W. Mellon Foundation.

Non-citizenship is part of the Andrew W. Mellon Foundation John E. Sawyer Seminar on the Comparative Study of Culture. Linking citizenship, migration, border, labor, and carceral studies, and juxtaposing spatial and social mobility and immobility, this year-long series of events explores what it means to be a citizen and non-citizen in a world made by migrants, refugees, guest workers, permanent residents, asylum seekers, slaves, prisoners, detainees, the stateless, and denizens (residents who do not hold the same rights as citizens). Non-citizenship is organized around three themes: “Forced Migration” (fall 2016), “Labor Mobility and Precarity” (winter 2017), and “Fluidity of Status” (spring 2017). Click here to learn more.

Sawyer Seminar: Beyond the End of the World
Website:
https://thi.ucsc.edu/projects/earth-futures-beyond-end-world/