Kevin McDonald, “Babbo and the Breadfruit: Plants, Oceans, and Empires in the Age of Enlightenment” 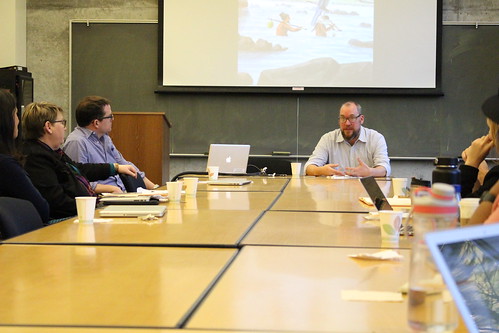 At the end of the eighteenth century, a fantastic global plot was conjured up by a network of invested individuals that eventually reached the highest levels of the British state and the Admiralty. The plan: to transplant South Pacific breadfruit to the Caribbean Islands to feed the slaves of empire. Slaves grew sugar that fueled the proto-industrial workforce of England, and sugar produced rum, that powered the imperial navy. This research talk will explore the trans-oceanic exchanges not just of breadfruit, but of Atlantic and Pacific maritime cultures from ca. 1767-1798. Tracing the story of Babbo and the breadfruit allows us to intersect the surprisingly entangled histories of the South Pacific, Europe, Africa, and the Caribbean, in a global history connected by plants, oceans, and empires; and the fusion of not two but three tropical farming systems (Africa, the West Indies, and the South Pacific).

Kevin McDonald is an Associate Professor of History at Loyola Marymount University in Los Angeles, who received his Ph.D. from UCSC in 2008. His first book, Pirates, Merchants, Settlers, and Slaves: Colonial America and the Indo-Atlantic World examined the important role played by pirates in the informal trade networks that integrated economies throughout the Indian and Atlantic Ocean trading worlds. His new project focuses on the transfer of breadfruit from the Pacific Ocean to the Caribbean as a potential crop to feed the Caribbean’s massive plantations.