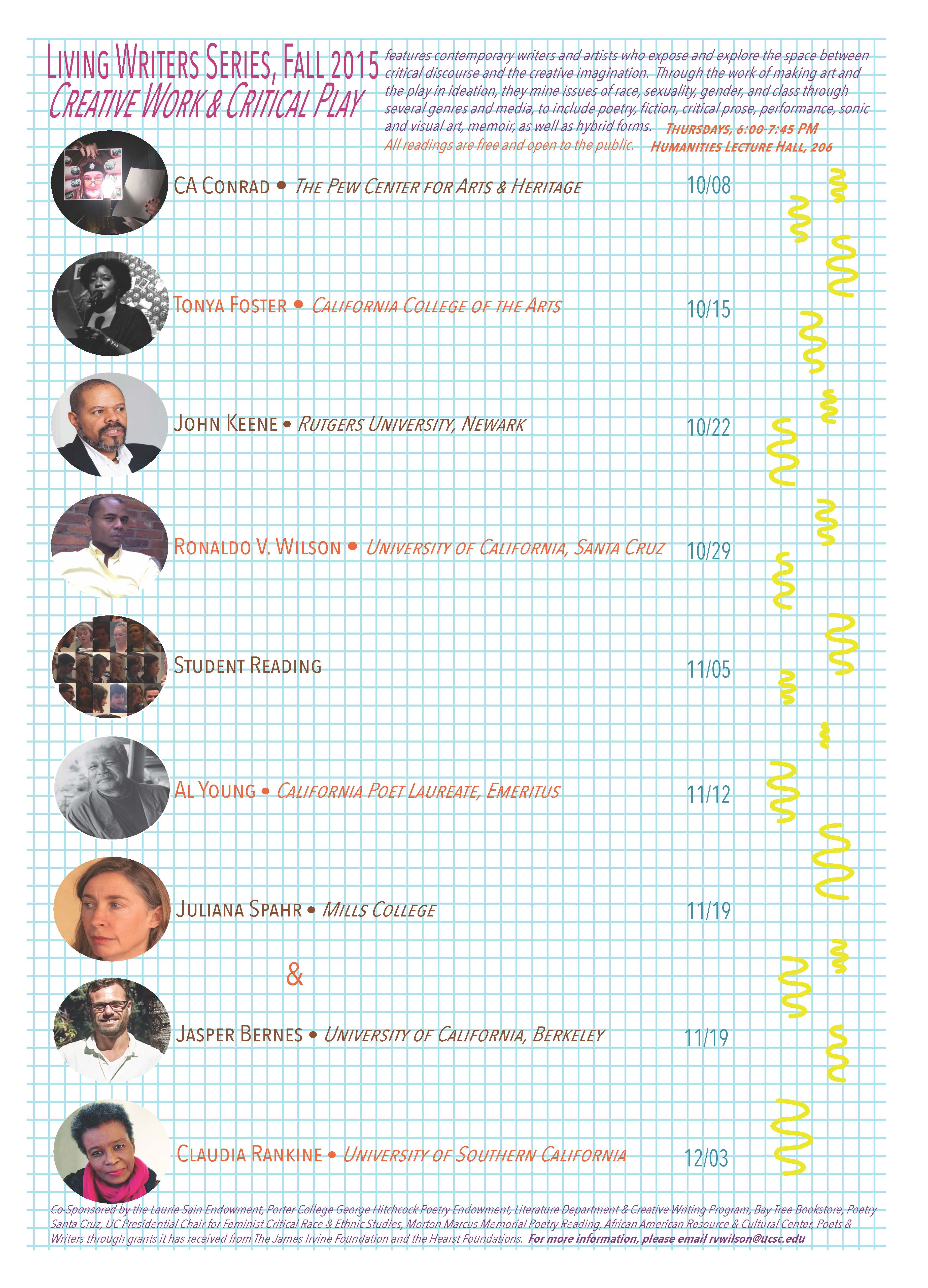 Claudia Rankine is the author of five collections of poetry including Citizen: An American Lyric and Don’t Let Me Be Lonely; two plays including Provenance of Beauty: A South Bronx Travelogue; and is the editor of several anthologies including The Racial Imaginary: Writers on Race in the Life of the Mind. She also co-produces a video series, “The Situation,” alongside John Lucas, and is the founder of the Open Letter Project: Race and the Creative Imagination. Among her numerous awards and honors, Rankine is the recipient of the Poets & Writers’ Jackson Poetry Prize and fellowships from the Lannan Foundation and the National Endowment of the Arts.

Rankine’s bestselling book, Citizen: An American Lyric (Graywolf, 2014), uses poetry, essay, cultural criticism, and visual images, to explore what it means to be an American citizen in a “post-racial” society. A defining text for our time, Citizen was the winner of the 2015 Forward Prize for Best Collection, the National Book Critics Circle Award for Poetry (it was also a finalist in the criticism category, making it the first book in the award’s history to be a double nominee), the NAACP Image Award, the PEN Open Book Award, and the LA Times Book Award for poetry. Citizen was nominated for the Hurston/Wright 2015 Legacy Award, was a finalist for the 2014 National Book Award, and was selected as an NPR Best Book of 2014, who stated: “This collection examines everyday encounters with racism in the second person, forcing the read-er—regardless of identity—to engage a narrative haunted by the deaths of Michael Brown, Trayvon Martin, and Renisha McBride.” Citizen also holds the distinction of being the only poetry book to be a New York Times bestseller in the nonfiction category.

In all of her work, whether writing about intimacy or alienation, Rankine’s voice is one of unrelenting candor, and her poetry is some of the most innovative and thoughtful work to emerge in recent years. Her work often crosses genres as it tracks wild and precise movements of mind. In the words of the Judges Citation for the Jackson Prize: “The moral vision of Claudia Rankine’s poetry is astounding. In a body of work that pushes the boundaries of the contemporary lyric, Rankine has managed to make space for meditation and vigorous debate upon some of the most relevant and troubling social themes of the 20th and 21st centuries….These poems do the work of art of the highest order—teach-ing, chastening, changing, astounding, and humanizing the reader.”

Her other poetry collections are Don’t Let Me Be Lonely (2008); the award-winning Nothing in Nature is Private; The End of the Alphabet; and Plot, wherein she welds the cerebral and the spiritual, the sensual and the grotesque. Don’t Let Me Be Lonely—a multi-genre project that blends poetry, essays, and image—is an experimental and deeply personal exploration of the condition of fragmented selfhood in contem-porary America. Rankine is also the author of the play, Provenance of Beauty: A South Bronx Travelogue, which is performed on a bus ride through the Bronx. The New York Times calls it an “engrossing urban adventure, which does not conform to the standard formula for theater but does make the bustle outside the bus throb with history, mystery and meaning, as the best live performances do.”

Rankine co-edited the anthology American Women Poets in the 21st Century: Where Lyric Meets Language, and her work is included in several anthologies, including Great American Prose Poems: From Poe to the Present, Best American Poetry 2001, Giant Step: African American Writ-ing at the Crossroads of the Century, and The Garden Thrives: Twentieth Century African-American Poetry. Her work has been published in numerous journals including Boston Review, TriQuarterly, and The Poetry Project Newsletter.

Born in Kingston, Jamaica, and educated at Williams College and Columbia University, she lives in California and is the Aerol Arnold Chair in the University of Southern California English Department.