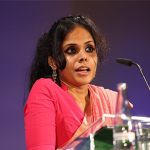 Meena Kandasamy (b. 1984) is an anti-caste activist, poet, novelist and translator. Her writing aims to deconstruct trauma and violence, while spotlighting the militant resistance against caste, gender, and ethnic oppressions. She explores this in her poetry and prose, most notably in her books of poems such as Touch (2006) and Ms. Militancy (2010), as well as her three novels, The Gypsy Goddess (2014), When I Hit You (2017), and Exquisite Cadavers (2019). Her latest work is a collection of essays, The Orders Were to Rape You: Tamil Tigresses in the Eelam Struggle (Navayana, 2021). Activism is at the heart of her literary work; she has translated several political texts from Tamil to English including the works of Dravidian ideologue Periyar and Viduthalai Chiruthaigal Katchi leader Dr.Thol.Thirumavalavan, and previously held an editorial role at The Dalit, an alternative magazine documenting caste-related brutality and the anti-caste resistance in India. Her novels have been shortlisted for the Women’s Prize for Fiction, the International Dylan Thomas Prize, the Jhalak Prize and the Hindu Lit Prize. She holds a PhD in sociolinguistics, and was Gallatin Global Faculty in Residence at New York University (NYU) in Fall 2018 where she co-taught a course on feminist writers from the neo-colonial world. Her op-eds and essays have appeared in The White Review, Guernica, The Guardian and The New York Times.

Presented by the Center for South Asian Studies and co-sponsored by Stanford University.