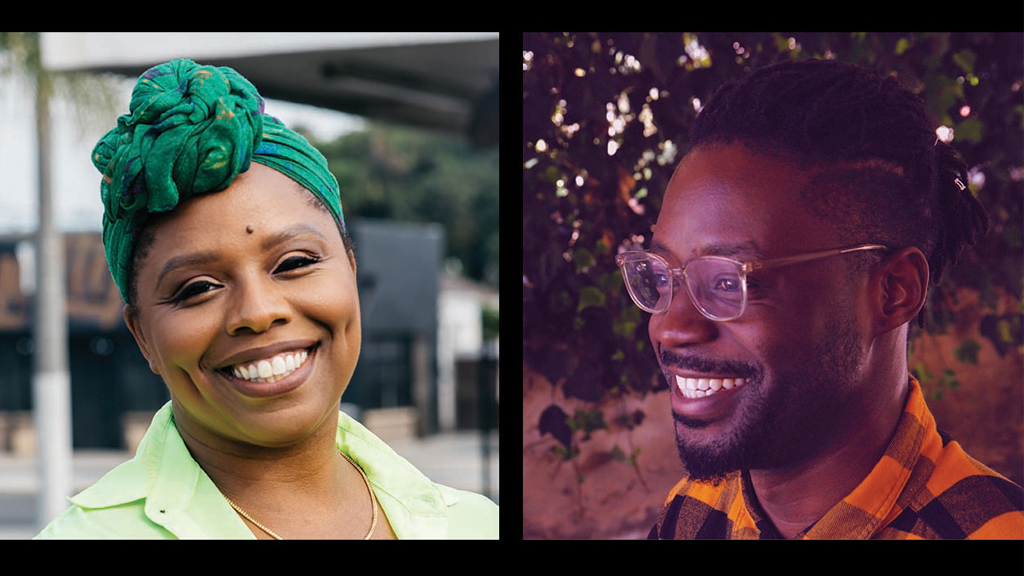 Visualizing Abolition is pleased to present “Popular Culture and the Radical Imaginary,” a discussion with Patrisse Cullors, co-founder of the Black Lives Matter Global Network and artist and activist Maxwell Addae. Their conversation will focus on their collaborative project researching the media portrayals of Black women and incarceration as well the real-world impact of the narratives told about crime and punishment in the United States.

Visualizing Abolition is a series of online events organized by Professor Gina Dent, Feminist Studies and Dr. Rachel Nelson, Director, Institute of the Arts and Sciences. The events feature artists, activists, and scholars united by their commitment to the vital struggle for prison abolition. Originally, Visualizing Abolition was being planned as an in-person symposium. Due to the ongoing pandemic, the panels, artist talks, film screenings, and other events will instead take place online. The events accompany Barring Freedom, an exhibition of contemporary art on view at San José Museum of Art October 30, 2020-April 25, 2021. To accompany the exhibition, Solitary Garden, a public art project about mass incarceration and solitary confinement is on view at UC Santa Cruz.

Artist, organizer, educator, and popular public speaker, Patrisse Cullors is a Los Angeles native and Co-Founder of the Black Lives Matter Global Network and Founder of grassroots Los Angeles based organization Dignity and Power Now. Cullors’ work for Black Lives Matter recently received recognition in TIME Magazine’s 100 Most Influential People of 2020 list and TIME Magazine’s 2020 ‘100 Women of the Year’. Cullors is a New York Times bestselling author of When They Call You a Terrorist: A Black Lives Matter Memoir (2018). She is also the Faculty Director at Arizona’s Prescott College of a new Social and Environmental Arts Practice MFA program that she has developed. Cullors is a former staff writer at Freeform’s Good Trouble series as well as an actress on the show. For the last 20 years, Cullors has been on the frontlines of criminal justice reform and led Reform LA Jails’ “Yes on R” campaign, a ballot initiative that passed by a 73% landslide victory in March 2020.

With a love of cinema’s more idiosyncratic directing auteurs, Maxwell Addae has strived to express himself as purely as possible. Most notable merging the vulnerably personal with genre flourishes. Following a small stint touring as a performance artist, which changed how he envisioned movement within film, he is now eager to utilize all of the new tools he’s acquired over the years. He has also been a semi-finalist or finalist in the following programs over the past year: Sundance Creative Producing Lab, Nicholls Fellowship, TIFF Talent Filmmaker Lab, and the Austin Screenwriting Competition. His American Film Institute thesis short and most personal work to date is called Outdooring which has screened at over 20 international festivals. Most notably the 2019 South by Southwest, Outfest, shortlisted for the Iris Prize, screened in the 2020 Clermont-Ferrand International Film Festival and was acquired in a three-year deal with Revolt TV.