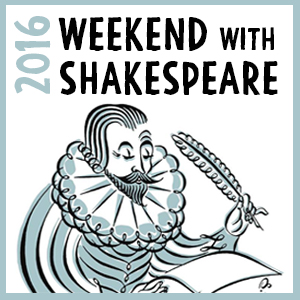 Join Shakespeare Workshop for a weekend of lectures, discussions, and demonstrations about Santa Cruz Shakespeare’s summer productions, A Midsummer Night’s Dream and Hamlet. New this year is an Educators’ Workshop on Sunday, August 14, an event for teachers that provides creative and scholarly resources for enlivening Shakespeare’s plays in classroom settings and beyond.

All lecture participants receive a research guide prior to WWS that provides current scholarship, historical background, and SCS production-specific information.

Lecture attendees are encouraged to attend the SCS productions of A Midsummer Night’s Dream and Hamlet either prior to the lecture days OR to see them as a package deal: Friday, August 12, 8pm Midsummer; Saturday, August 13, 2pm Hamlet.

Exclusively for teachers, this new part of WWS will include three 45-minute sessions on successfully teaching Shakespeare’s work as an integral part of the curriculum. While exploring different methods for engaging with Shakespeare’s plays—performance, text, and design—participants will gain hands-on training and resources for bringing texts to life in the classroom and beyond.

Design: Envision and create the world of Shakespeare’s plays through hands-on craft

About the WWS guest Shakespeare scholar:

Bruce Avery is Professor of Theater Arts at San Francisco State University. He holds a PhD in English Literature and Classics from UC Santa Cruz. He has written on Spenser, Joyce, Kipling, Salman Rushdie, Christopher Marlowe, Shakespeare, and pedagogy. He is an actor and director, and has played Vladimir in Waiting for Godot, Polonius in Hamlet, Peter Quince in A Midsummer Night’s Dream, and Old Capulet in Romeo & Juliet, among others. His directing credits include Venus in Fur, A Midsummer Night’s Dream, As You Like It, and Woody Allen’s God, among others, and most recently Much Ado About Nothing.

About the Educators’ Workshop facilitators:

Mike Ryan first came to Santa Cruz in 1997 to play Silvius in As You Like It and Piotr in The Forest at Shakespeare Santa Cruz. That season launched a long career with SSC; he appeared in over 35 productions with the company before it was closed at the end of 2013. Along with Marco Barricelli and the Shakespeare Play On Board of Directors, he founded Santa Cruz Shakespeare in early 2014 and served as Co-Artistic Director for the new non-profit theatre company in its inaugural year before taking over as sole Artistic Director at the end of that season. In addition to his acting work with both Santa Cruz Shakespeare and its predecessor, Bay Area audiences may also know him from performances with American Conservatory Theatre, San Jose Repertory Theatre, Jewel Theatre Company, and Aurora. He has also appeared at Laguna Playhouse, Pasadena Playhouse, Denver Center Theatre, La Jolla Playhouse, Geva Theatre Center, Idaho Shakespeare Festival, Shakespeare Festival of Dallas, and Oklahoma Shakespeare in the Park. Mr. Ryan received his B.F.A. from Southern Methodist University, where he was a National Merit Scholar, and his M.F.A. from the University of California at San Diego.

Marvilyn Quiroz’ relationship with The Bard started as a twelve-year-old in the libraries of East San Jose deciphering Elizabethan language using the side by side version of Romeo and Juliet. Her mother took her to free plays as an escape from barrio life where she saw Shakespeare’s words come alive. Marvilyn is now a California Reading and Literacy Project Teacher Leader, Central California Writing Project Fellow, and Mentor with the Santa Cruz/Silicon Valley New Teacher Project. She loves designing curriculum and facilitating workshops where teachers explore their craft and share their expertise. As an educator for over ten years in the Pajaro Valley Unified School District she has traversed a range of grade levels and courses from 10th grade Honors English to beginning English Language Development. Her approach to literacy considers all students academic language learners, which highlights her commitment to equity and passion for promoting students’ access to language that will inspire and empower. Her email is marvilyn_quiroz@pvusd.net.

Kate Edmunds has designed scenery throughout the United States for over thirty-five years. She has designed for Manhattan Theatre Club, Berkeley Repertory Theater, ACT/SF, the Mark Taper Forum, the Jewel/SC, Chicago’s Goodman Theater, Seattle Rep., Boston’s Huntington Theater and Arena Stage in Washington, D.C. among many others. She earned her MFA in Design at the Yale School of Drama. Kate teaches design in the Theater Arts department at UCSC.

Shakespeare Workshop, a research center of the UCSC Institute for Humanities Research.