Eight Undergraduate Research Fellows from Feminist Studies, Literature/Creative Writing, Music, Linguistics, Legal Studies, History, and History/Jewish studies will be recognized on June 5, 2019, at the annual Humanities Spring Awards. The Humanities Division’s award ceremony acknowledges those who have achieved special recognition, distinctions and honors over the course of this last year. Highlights include the presentation of the John Dizikes Teaching Awards in Humanities, which honors the teaching efforts of faculty, and the presentation of awards to THI’s Humanities Undergraduate Research Fellows. The Fellows will present their own research during the ceremony.

Legal Studies student Stephanie Perez and history student Garrett Starke were awarded the Bertha N. Melkonian Prize. Below we have included descriptions and images of the Fellows’ research. 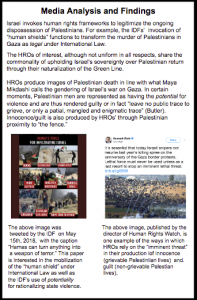 Summer Al-Saleh’s project is concerned with the ongoing Great March of Return in Gaza and the interpretations and articulations of human rights that have been employed by Amnesty International, B’tselem, Human Rights Watch, Israeli UN envoys and the Israeli Defense Forces. This research is interested in “the convergences between these actors’ use of human rights frameworks. Summer examines the Israeli state’s mobilization of human rights (ecological warfare and human shields) in their narration of the protests and liberal human rights organizations’ naturalization of settler-colonialism and legitimation of Israeli sovereignty. Specifically, Summer looks at these organizations’ employment of categories such as “the (non)imminent threat” and their production of innocent (grievable) and guilty (non-grievable) Palestinian lives.” 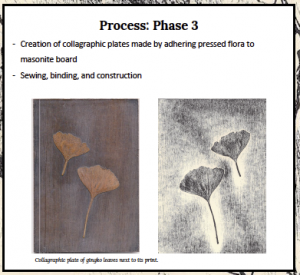 Don’t Pick Corn Before It’s Ripe and Other Lessons is a set of twenty one letterpressed, hand-bound, hardcover books of seven poems and six collagraph prints. Morgan Corona states, “The poems in this edition examine themes of family, death, alcoholism, farming, moths, and the flora of the Santa Cruz Mountains. Often, these themes intersect. Through the medium of print, I am able to enhance the themes present in my poetry through the images I have created to accompany the text. I created collagraph plates by adhering pressed flora to masonite board. The plants used include sage, ginkgo, lavender, lady fern, fennel, and wild mustard. I collected most of these plants from the farm that inspired many of the poems in the book. When printed, the plants appear as ghostly silhouettes surrounded by a halo of off-white paper. These images paired with the poems in the book not only reinforce the importance of the natural world in my poetry, but also the people that appear in my poems that have passed away.” 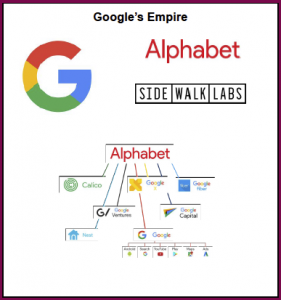 Natalie Gonzales, Feminist Studies
“Archiving the Future through the Digital: Redesigning the Human through Indigenous and Decolonial Technoscientific Imaginaries”

Natalie Gonzales’ digital humanities project is invested in archiving the future through the digital, via a podcast series on indigenous and decolonial imaginaries in science and technology. Gonzales says that through this research she has engaged  with material in Feminist Science Studies (FSS), Science Technology Studies (STS), and Latinx Studies through a decolonial framework. Additionally, she has placed indigenous feminist voices and imaginaries at the center of this decolonial framework. Gonzales states, “My larger theoretical project investigates questions of biotechnology, security and empire through interrogations of the human. My research is intervening in questions of post-humanist frameworks and how conceptualizations of the human are being crafted through bio/necropolitics. My question is twofold: how are bodies constituted through empire building, specifically through carceral notions of time and space? In what ways can the human be critically and hopefully redesigned against these logics through decolonial feminist imaginaries centering indigenous, Latinx, and Latin American feminist genealogies of thought? I am interested in how logics of empire and masculinist technoscientific projects can be subverted to open up a different set of socio-political possibilities and radical imaginaries concerning the construction of the human in technoscience.” 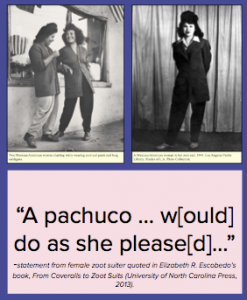 Metztli Hamelius’ project asks: “How were Pachuca identity, fashion and relationships in the 1940s queer? The dress of Mexican-American Pachucas (the female-identified counterparts to male-identified Pachucos) in the 1940s, in the historical moment that immediately preceded the Zoot Suit Riots, was either highly sexualized/feminized, or was almost identical to the dress of their male counterparts. These two fashion modalities are distinct yet related, and each makes strategic use of a particular way of performing gender.” 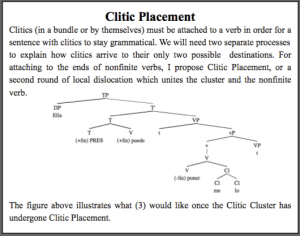 Paula Ledesma describes her project as follows: “Clitics are small pronouns with very interesting distributions. Clitics are able to appear after the nonfinite verb or before the finite verb. It is evident that there is some process that accomplishes to move a clitic from direct object or indirect object position to a position that is attached to the verb.

David M. Perlmutter accounts for clitic ordering in Deep and Surface Structure Constraints in Syntax. Perlmutter proposes that the issue of clitic order could be solved through a surface structure constraint, which is applied as a filter to the sentence after all movement has occured. Although this proposal provides a narrative for the ordering of clitics, it does not account for clitic placement or clitic climbing.” 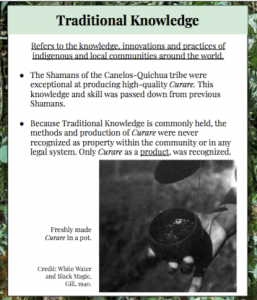 “The history of medical knowledge in the developing world is usually understood through one of two lenses, each with a dramatically different focus: ethnographies of local healing, with attention given to traditional concepts and techniques, or examinations of colonial medical projects, as Western concepts and techniques transformed practice on the “periphery.” Yet we have many examples of medical knowledge traveling in the other direction, as plants, animals, and all manner of materia medica used in local healing made their way into the centers of medical knowledge in the United States and elsewhere in the developed world. Bioprospecting in the Amazon provides a good example. The international trade of endemic organisms between the United States and Ecuador in the early 20th century raises questions about the social, cultural, and legal repercussions of this exchange. How does one examine the impact of bioprospecting in Ecuador, when the very notions of “property” and “ownership” might be defined very differently as one moves across national borders and cultures? Or, how might one investigate important legal concepts related to bio- prospecting, when Indigenous notions of justice might be in conflict with both Ecuadorian and American legal systems?” These questions are central to Stephanie Perez’s project, which explores the legal aspects of bioprospecting in Ecuador in the mid-twentieth century and its relationship to pharmaceutical development in the United States.

Garrett Starke’s research delves deeply into the origins of the Native American religious “Ghost Dance” movement. As Starke explains: “The Ghost Dance was a religious movement already decades in the making by the time of the infamous 1890 Massacre of Wounded Knee. It arose from the prophecies of weather doctors on a Paiute reservation in Nevada, but would quickly spread to Native American tribes across the country. The 1890 religion was complete with a messianic figure, a series of timed community gatherings, a set of new codes to live by, and an imposing rapture of sorts. The Paiute prophets promised tribes from the Great Plains to the West Coast that if they performed the Ghost Dance, that North America would be cleansed of its colonizers and become a paradise for the tribes who heeded their call. The whole of the Ghost Dance Religious Movement is often boiled down to its role in the atrocities that took place during the Massacre of Wounded Knee in 1890. However, what originally peaked my interest in the Ghost Dance was the idea that religious movements can take the form of resistance to systemic physical and cultural violence. I immediately wanted to know more about how the religion began, what kind of political and religious environment formed such a movement, what its effects were on the Native American tribes that practiced it, and what its long-term legacy was for tribes that had been involved.” 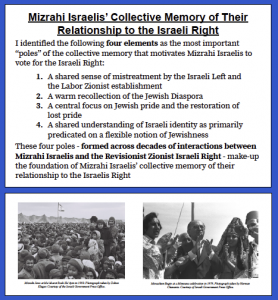 Avery Weinman, History/Jewish Studies
“Reverberations From ‘The Earthquake’: Collective Memory and Why Mizrahi Israelis Vote for the Israeli Right”

Avery Weinman states that this project’s central question is: “Why did Israel’s Mizrahim—who, before their mass migrations from Middle East and North Africa had had a tepid relationship to Zionism at best and denounced it as heretical and threatening at worst—become the backbone of Israel’s increasingly nationalistic right-wing?” Weinman goes on to explain: “In the Israeli elections of 1977, Menachem Begin’s right-wing Likud party garnered a majority of votes and seized control of Israeli politics after three decades of domination by Israel’s left-wing labor parties. With this victory, Begin became the first right-wing prime minister in Israel’s history, ending the era of left-wing hegemony and signaling a new chapter in Israeli politics. This political upset—known in Israel as HaMahapakh: literally, “the Upheaval”—was revolutionary in terms of pure politics, but also revolutionary in its implications for Israeli society. Begin’s victory was due in no small part to the near total political dedication to the Likud from Israel’s Mizrahi population. Israel’s Mizrahim—Jews from across the Middle East and North Africa who arrived in Israel mainly in the 1950s and 1960s after their deracination from centuries old diasporas in places like Morocco, Tunisia, Egypt, and Syria—faced profound marginalization and disenfranchisement from the ruling Israeli elite upon their arrival. The central role Israeli Mizrahim played in the Likud’s success was both a repudiation of the Israeli Left, and an assertion of their own political agency and importance as Israeli citizens.”