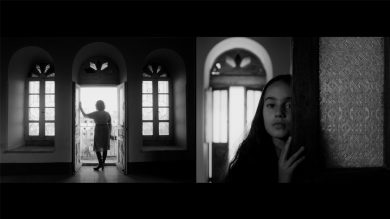 An abandoned nuclear reactor under the biblical town of Bethlehem has been converted into an enormous orchard. Using heirloom seeds collected in the final days before the apocalypse, a group of scientists are preparing to replant the soil above. In a bunker, two women debate what a rebuilt humanity should look like. Such is the setting of Larissa Sansour’s 2019 film In Vitro, a 2-channel Arabic-language sci-fi filmed in black and white and set in the aftermath of an eco-disaster.

On December 2, the Center for the Middle East and North Africa (CMENA) and the Center for Cultural Studies will host a screening and discussion of In Vitro. The film was co-directed by Sansour and Søren Lind, and it interrogates the themes of social change, memory, and the politics of the climate crisis. Following the screening, Professor Peter Limbrick (Film and Digital Media, UC Santa Cruz) will moderate a discussion with Sansour and Lind. 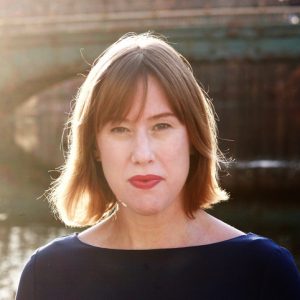 CMENA Director Jennifer Derr (History, UC Santa Cruz) has been instrumental in bringing this event to the Humanities community. The work of Sansour has been on Derr’s radar for some time now. “Sansour frames questions of immediate political relevance through striking and otherworldly landscapes,” Derr explains. “When I was considering programming for the CMENA this year,” says Derr, “I was drawn to In Vitro because it offered a thoughtful lens through which to consider different but intersecting forms of disaster. Much of the current programming that we see featured by academic centers right now focuses on literal treatments of other historical pandemics. I was looking for opportunities to engage our community with artistic visions that treat the intersections of multiple crises, especially those related to the interconnectedness of environment, health, and notions of community. I also wanted to provoke a conversation about some of the more philosophical and abstract issues that catastrophe raises.”

As a filmmaker who was born in East Jerusalem, the innovative work of Sansour takes up the fraught history of the region and the politics of memory which have interfaced with it. Limbrick notes that: “Sansour has a research practice that combines stunning visual images and sound elements with deep thinking about ideas of history, memory, exile, belonging, and of possible futures. In her collaborations with Søren Lind she also animates the genre of sci-fi as a vehicle for thinking about Palestinian narratives and histories.” 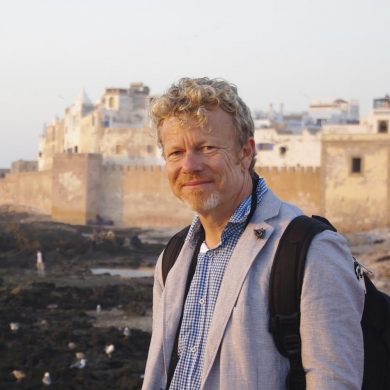 The screening of Sansour and Lind’s film highlights the outstanding programs and events CMENA is leading at UC Santa Cruz CMENA is dedicated to creating community and promoting education and research about the histories, politics, and cultures of the peoples who live in the Middle East and North Africa. Established in 2019 with support from The Humanities Institute, the Center sponsors events that bring students, faculty, staff, and broader communities into conversation with scholars, activists, journalists, cultural producers, and those involved in the politics of the region. Last year, CMENA’s programming included events such as a Questions That Matter conversation on Reporting the Middle East and the Future of Investigative Journalism with NPR journalists Hannah Allam and Leila Fadel, an art walk with media artist Walid Raad, and a screening of Ismaël Ferroukhi’s film Free Men (the latter of which was co-sponsored by the Center for Jewish Studies). Derr is continuing to plan exciting programs in the year ahead. As she shares, “A number of our affiliated faculty have published books in the past year and we’re featuring discussions of their work all year. We’re also working with the Center for South Asian Studies to plan two events on the theme ‘Migrant Futures,’ the first event in January and the second in May.” Throughout the winter quarter, CMENA will also be offering programming focused on critical issues in the study of North Africa.

CMENA’s screening of In Vitro in the broader Humanities landscape at UC Santa Cruz demonstrates the Center’s commitment to tackling the critical issues of the day. “For me,” says Derr, “Sansour’s work has never felt more resonant. As the Founding Director of the Center for the Middle East and North Africa, one of my objectives is to demonstrate how the questions raised about and from the region can be of global significance.”

We hope you join us not only on December 2nd for this amazing event, but for all of CMENA’s rich programming schedule over the rest of this year.

Learn more about the Center for the Middle East and North Africa on their website and register for the In Vitro: Film Screening and Conversation on December 2 at noon.