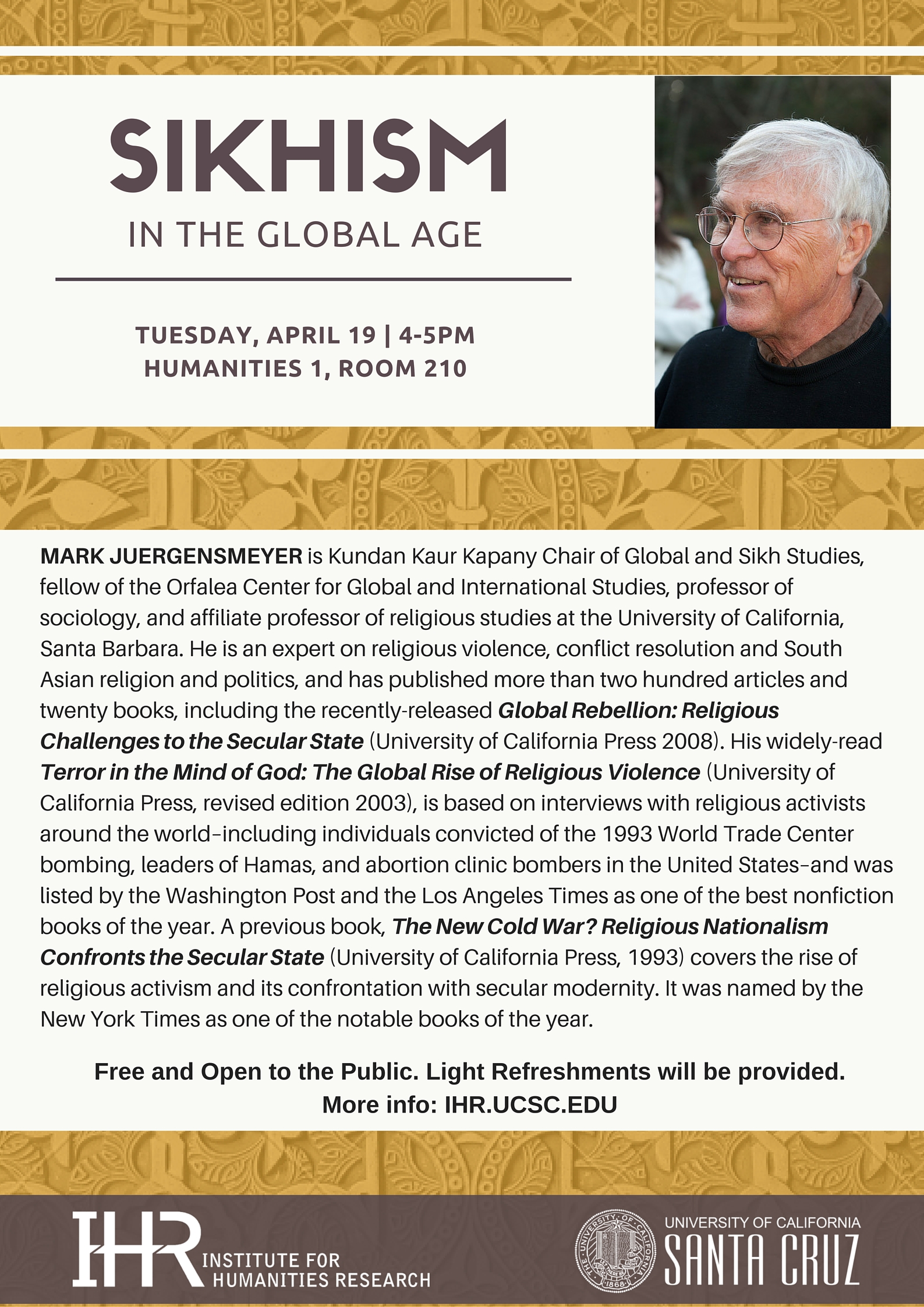 Sikhism in the Global Age

Mark Juergensmeyer is Kundan Kaur Kapany Chair of Global and Sikh Studies, fellow of the Orfalea Center for Global and International Studies, professor of sociology, and affiliate professor of religious studies at the University of California, Santa Barbara. He is an expert on religious violence, conflict resolution and South Asian religion and politics, and has published more than two hundred articles and twenty books, including the recently-released Global Rebellion: Religious Challenges to the Secular State (University of California Press 2008). His widely-read Terror in the Mind of God: The Global Rise of Religious Violence (University of California Press, revised edition 2003), is based on interviews with religious activists around the world–including individuals convicted of the 1993 World Trade Center bombing, leaders of Hamas, and abortion clinic bombers in the United States–and was listed by the Washington Post and the Los Angeles Times as one of the best nonfiction books of the year. A previous book, The New Cold War? Religious Nationalism Confronts the Secular State (University of California Press, 1993) covers the rise of religious activism and its confrontation with secular modernity. It was named by the New York Times as one of the notable books of the year. His book on Gandhian conflict resolution has been reprinted as Gandhi’s Way (University of California Press, Updated Edition, 2005), and was selected as Community Book of the Year at the University of California, Davis. He has edited the Oxford Handbook of Global Religion (Oxford University Press 2006) and Religion in Global Civil Society (Oxford University Press 2005), and is co-editing The Encyclopedia of Global Religions (Sage Publications 2008) and The Encyclopedia of Global Studies (Sage Publications 2009). His 2006 Stafford Little Lectures at Princeton University, God and War, will be published by Princeton University Press.

Juergensmeyer has received research fellowships from the Wilson Center in Washington D.C., the Harry Frank Guggenheim Foundation, the U.S. Institute of Peace, and the American Council of Learned Societies. He is the 2003 recipient of the prestigious Grawemeyer Award for contributions to the study of religion, and is the 2004 recipient of the Silver Award of the Queen Sofia Center for the Study of Violence in Spain. He received an Honorary Doctorate from Lehigh University in 2004, a Distinguished Teaching Award from the University of California, Santa Barbara in 2006, and the Unitas Distinguished Alumnus Award from Union Theological Seminary, New York, in 2007. He was elected president of the American Academy of Religion, and chairs the working group on Religion and International Affairs for the national Social Science Research Council. Since the events of September 11 he has been a frequent commentator in the news media, including CNN, NBC, CBS, BBC, NPR, Fox News, ABC’s Politically Incorrect, and CNBC’s Dennis Miller Show.