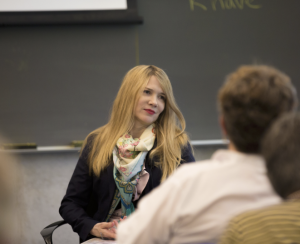 Ashley Herum is a PhD Candidate in literature at UC Santa Cruz. As a C.L. Barber Memorial Fellow this summer, Herum was involved with both Weekend with Shakespeare and one of its co-sponsoring organizations, Santa Cruz Shakespeare. When THI spoke with Herum this month, she had many insights to share about the day-to-day life of a dramaturg, gender switching in a production of Shakespeare’s The Comedy of Errors, the 1980s, and the collaborative benefits of working in theater.

Congratulations on your appointment as a THI Fellow for Summer 2019 with Santa Cruz Shakespeare (“SCS”)! What does your work with SCS involve?

Thank you! It’s such an honor to have received the C.L. Barber Memorial Fellowship in Dramaturgy. I am grateful beyond measure, as the fellowship and SCS together have allowed me to develop some experience and expertise as a dramaturg—this year, for one of the company’s summer 2019 productions, The Comedy of Errors.

What does your day-to-day work as a dramaturg look like?

My work for the company has a couple of phases. Initially, in the months before the rehearsal period begins, I re-read the play and also begin delving into scholarly criticism of it. During this stage, I write the information about the play that is included in that season’s playbill. At some point, the director may ask me to write a dramaturgy packet for the actors—or may ask that I not do so, as the case may be! I may also talk with the director over the phone, or meet in person.

I read Shakespeare and watch his plays because I am astounded and moved by his artistry. This appreciation helps me to discern patterns in the plays that shape it and give it meaning.

Once the rehearsal period begins, I attend the rehearsals. I look at the daily schedule, which is distributed the night before, to see what scenes we’ll be rehearsing on a given day. Before attending, I make a point of reviewing those parts of the text. At the rehearsals themselves, I do assorted things: if the director, or actors, or anyone else involved in the production has a question about the text or its historical context, for example, I do my best to answer the question (or, at least, to provide some relevant information), or else to find an answer later through research at the library, or through the library’s on-line journals. I pay attention to a variety of things, including themes, topics, or particular terms from the text that seem to interest the director. If I sense that the director has a particular interest, or if I think that something is relevant, I’ll research whatever [it] is, outside of rehearsal time. I then will write up a note (or sometimes a several-page report!) for the director on whatever I’ve been looking into.

I write a fair number of notes to the director. Since we oftentimes rehearse until late at night, I usually write the notes in the morning, before rehearsal starts. The notes I write are probably the primary way I convey information and my perspective to the director for her/his consideration. Thus, although I am present in rehearsals, my role is very much “behind-the scenes” in nature.

If, as a woman, you’re going to be present in the workforce, you’d better not take up much room—with the exception of your 1980s-era shoulder pads and “big hair,” of course.

You worked this summer as the dramaturg of a flashy, 1980s-themed production of The Comedy of Errors. Its “”Miami Vice” aesthetic” sounds very fun! What can you tell us about the production?

Yes, it was very fun! One point of interest is that the production features gender-switching for some of the main roles, including the switching of the main characters from male to female. Our director, Kirsten Brandt, chose to stage the play in the 1980s, an era when women had joined the public workforce and, in many cases, too, were obsessively engaged in fitness in order to be as thin as possible—two aspects of 1980s life that are present in the production. After all, if, as a woman, you’re going to be present in the workforce, you’d better not take up much room—with the exception of your 1980s-era shoulder pads and “big hair,” of course.

How did this temporal setting influence the production?

The 1980s-era aspects of the production that were probably most evident to the audience were the visual and aural elements, such as the beautiful set and costumes, the wigs, and the pop music. All of those were the work of the designers and their assistants and interns. My part in the 1980s-aspect of the production almost solely had to do with coming up with some of new words used to designate the originally male, or originally female characters. For example,  if “husband” no longer made sense, owing to the fact that the character originally called “husband” was being played as a female, then we would change “husband” to something like “dear wife.” The “dear” would be added so that the new phrase would would fit the poetic meter. Generally, we looked for words that, as much as possible, had a similar connotation to the term in Shakespeare’s text and were current in Shakespeare’s time.

As the play’s dramaturg, however, I concentrated on Shakespeare’s text generally, and on how it manifested on stage. I spent a lot of time reading up on the play’s biblical allusions, for example, as well as its references to classical, or other pagan religions, and to magic. These aspects of the play may seem far away from the 1980s, in a coastal city vaguely like Miami, but they do give the play its shape and allow for its emotional impact, which is surprisingly intense, considering the farcical antics that go on throughout most of the play.

What background and experiences were you drawing on for this role? 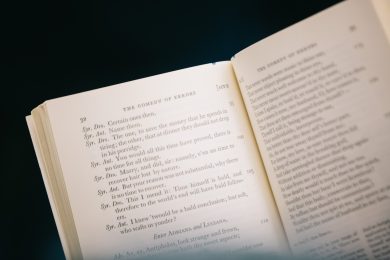 The Comedy of Errors at Weekend with Shakespeare. Photo credit: Crystal Birns.

In this role, I draw, among other things, on my background in classical literature and classical music. I am currently a PhD candidate in Literature, writing a dissertation about some of Shakespeare’s plays. I came to UC Santa Cruz with a MA Degree in classics (Ancient Greek and Latin languages and literatures). Studying classics is helpful for at least a couple of reasons: Shakespeare himself was very familiar with classical literature, sometimes in the original Latin (it’s uncertain how much Ancient Greek he knew), sometimes in English, or, it may be, in Italian translation, and he often alludes to classical literature in his plays. In addition, as a student of classics, I was taught to read poetry in meter and to engage with complex language. Also important to my appreciation of the rhythm, phrasing and complexity of Shakespeare’s language is my background in playing classical piano as a child and adolescent. I suppose because of that musical education, I tend to think of Shakespeare’s text as music containing patterns and phrasing.

You were so involved with SCS this summer. What are you most proud of?

One thing I am proud of is having built a successful working relationship with our dramaturgy intern, Cassie Archer, who brought a lot of enthusiasm, diligence, and good humor to the rehearsal room. During rehearsals, she and I would discuss points that the director had raised, or that she or I found interesting. We also read some scholarly articles together and discussed them, and went on a “dramaturgy field trip” (as we called it) to UC Santa Cruz’s McHenry Library. It was very rewarding to work with someone who was as astute and well spoken as our dramaturgy intern was, and who enjoyed reading scholarly articles as much as I do.   I learned a lot, as I always do, by observing the contributions of everyone else involved in putting on the play.

At Weekend with Shakespeare (this year on August 17-18) both Santa Cruz Shakespeare and the Shakespeare Workshop, the on-campus Center for Shakespeare at UC Santa Cruz, work together. What can you tell us about this collaboration? 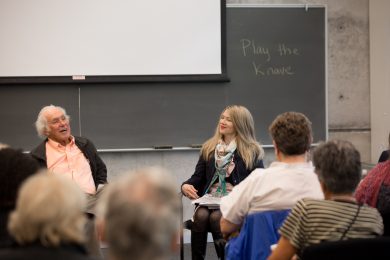 At the Weekend you were featured on a panel with Dr. Michael Warren, Head of Dramaturgy at Santa Cruz Shakespeare. Can you talk about the benefits of discussions like the ones you were a part of?

Yes, I was featured on a panel with Michael Warren, who, in addition to being the Head of Dramaturgy at Santa Cruz Shakespeare, is Professor Emeritus of Literature at UC Santa Cruz. It was an honor and a pleasure to be featured with him, as he has been a mentor to me for several years. I received my introduction to dramaturgy through working as his assistant dramaturg, and it’s always delightful to work with him. On the panel he and I answered questions about SCS’s particular production of The Comedy of Errors and about Shakespeare’s text of the play. I think one benefit of such discussions is that they are centered on a particular production. Participants could ask us about Comedy of Errors, and Michael and I could share things about the text that were relevant to [our] particular interpretation of the play. 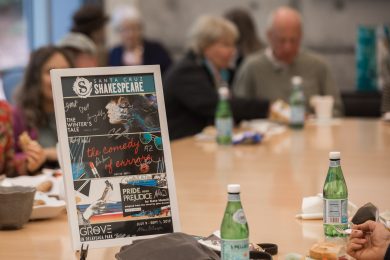 I would say that another benefit of such discussions is the conversational aspect. The panel Michael and I formed was advertised as a “conversation” with the workshop participants. I found out some of the things that interested the participants about that particular play’s text, or about Santa Cruz Shakespeare’s particular production. I gained some sense that way of what our audience brought to the play. One audience member may have spent several months before the production carefully reading Shakespeare’s text, or another audience member may recently have seen a very different production of The Comedy of Errors elsewhere, and been intrigued by the way our production differed. Admittedly, I would sometimes find these things out outside of the officially featured conversation, when I talked to workshop participants before or after the panel, but they would share these things with me because I was featured on the panel.

I believe the panel, or conversation, was mainly a way to share with each other our sense of interest in the play and to acknowledge, and maybe even generate, that mutual sense of enthusiasm. I’d like to think it heightened everyone’s enjoyment of the show.

What are your own goals as a dramaturg, professionally, artistically, personally? Where do you think you’ll take this summer’s experience?

Artistically, I hope to continue to bring my aesthetic appreciation of Shakespeare to bear on my work. I read Shakespeare and watch his plays because I am astounded and moved by his artistry. This appreciation helps me to discern patterns in the plays that shape it and give it meaning. As is relevant, I can share what I discern with the director and others involved in a production, for their consideration. I also find the relatively drawn-out process of putting on a play very satisfying from an artistic perspective. As I mentioned, as a child and adolescent, I played classical piano. The slow, contemplative, even exacting, process of preparing a piece of music for performance, both alone and with my teacher, was something I always enjoyed. Working on a play reminds me of that process.