Making Shakespeare Approachable for the Community 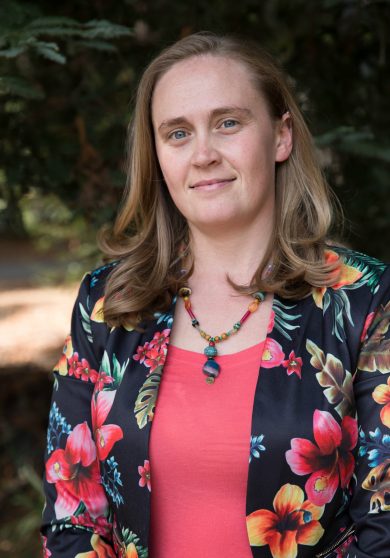 Gates sees her work on this production as part of a broader obligation for scholars to bring the arts to the community. In this way, her Public Humanities role functioned “to help make this play make sense for the audience.” As the run of The Two Noble Kinsmen drew to a close, THI connected with Gates to think through the complexities of bringing works that scholars have spent months studying to a community who may or may not have ever encountered them. “I sense that, generally, Shakespearean theater could strike folks in the community as elite and unapproachable,” says Morgan.  “This is really not the case!”

In two sentences, what can you tell us about your summer with Santa Cruz Shakespeare (“SCS”)?

I have been working as the dramaturg for The Two Noble Kinsmen under the mentorship of UC Santa Cruz Professor Emeritus Michael Warren, SCS’s lead textual consultant.  I provided context, research, and guidance during script development, production, and rehearsal.

Who have you been working with?

Santa Cruz Shakespeare’s Fringe Company.  This is the intern group, typically early career folks.  They are incredibly hardworking as they put on a performance separate from the rest of the regular cast.  The production we have been developing is William Shakespeare and John Fletcher’s The Two Noble Kinsmen.  This is a play that draws and develops from Chaucer’s “Knight’s Tale,” the first in The Canterbury Tales.  This is the first time, I believe, that the intern company is responsible for a Shakespearean performance.

Many of us are unfamiliar with the work of a dramaturg. Can you tell us more—what specifically have you been doing with the company? 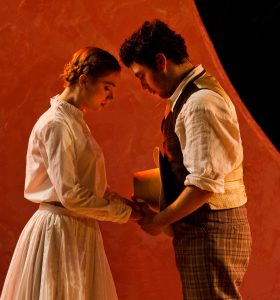 Much of the work I have done has been with the director, Dash Waterbury, to make the Shakespearean text cohere with the production choices—in other words, making an early modern play that draws from medieval culture that itself draws from ancient Greek culture make sense in the setting we have chosen, roughly the 1850’s U.S. American frontier.

In my work with the director, this has meant answering research questions about themes that cut across these different epochs, especially codes of honor, Greek customs for burial, medieval chivalry, and frontier justice, for example.  It has also meant making script choices to make the play’s language and its structure intelligible to an audience who has not spent months reading the play.  I see this as an important part of my work in the public humanities.

I sense that, generally, Shakespearean theater could strike folks in the community as elite and unapproachable.  This is really not the case!  Especially in its time, it was definitely not “elite” literature.  It was democratic, bawdy, down-to-earth, dealing in realistic human concerns that cut across distinctions, such as class, sexuality, and gender. I see my work aligning with other strategies at SCS to bring the arts to the community, such as their work with student groups and their “Pay What You Will” days, where the audience can decide their admission price.

What does your day-to-day look like in this role?

I have been working closely with the cast in day-to-day rehearsal.  Because the actors are quite busy, I have been present to answer questions about line delivery, meter, and the meaning of complicated verse or unfamiliar terms and concepts.  I have also consulted with many of the actors about how they can approach their roles and better understand the work that they are doing.  In rehearsal, I have done this by offering suggestions for an interpretation of the play’s language and themes to help the actors make choices in performance.

What’s it like coming into a company you haven’t worked with before? How hard (or easy) has it been to fit in?

Because the Fringe Company is essentially five actors, the director, and the stage manager, the THI Public Fellowship was an excellent opportunity to fill a needed role.  I was especially excited for the role of dramaturg in this particular production.  As I am an early career academic, I understand the need for support and relate deeply to this group of early career actors on that front.  I was so excited to get to know this group and to provide support in their career endeavors.  I see my work with these talented folks as the second prong in my work as a public humanities fellow.  Being able to contribute to their success at SCS, which I believe will lead to future successes, has been a real gift for me.

What parts of your own, academic background are you drawing on for this role? Are you a Shakespearian or Medievalist… or Chaucerian? 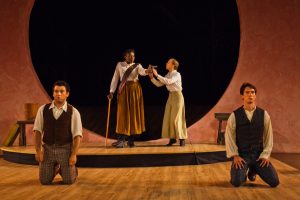 I am not a Shakespearean scholar, though my education has prepared me to work with this specific author.  In my undergraduate work, Shakespeare was a required course for the major curriculum.  I have also taken graduate courses where I have written extensively about Shakespearean drama.  My academic work is typically in 20th century U.S. American literature, visual culture, and sound culture.  I have recently been thinking about theatrical performances in that context.  One of my latest projects involved looking at a pageant composed and staged by Dr. W.E.B. Du Bois, called The Star of Ethiopia.  I have been doing archival work to examine the “soundtrack” Du Bois assembled for the pageant to think about the ways in which music functions in this piece in connection with his projects of racial uplift.  So, the visual and aural qualities of theater have emerged as a scholarly interest to me, and there was much music and dancing in the text of The Two Noble Kinsmen, though only some made it into the performance.

This all worked out nicely because what the director needed most was answers to research questions about the culture and customs of the U.S. west of the Mississippi just before the start of the 20th century.  My ability to answer research questions about U.S. culture for the director as they emerged in the production process helped him make choices, as well as the actors.

Can you talk more about the public humanities aspect of this job? What does that mean to you?

The key is helping make this play make sense for the audience.  For example, The Two Noble Kinsmen is a difficult piece that relies heavily on the expectation that the audience recognizes its cultural references.  In an early modern setting, when the play was first performed, these references would be clear to the audience, and references to medieval literary works, ancient myth, and 17th-century music might still be clear to someone with an advanced degree in literature, but it might not be so clear for the average spectator. Santa Cruz Shakespeare encourages all members of the community to come and experience the arts, so it was important to me to suggest changes to the performance that would make its language more legible, compelling, and fun for all of our community while remaining true to the work.

What are you taking away from this summer’s experience?

I have never worked with a theatrical production, so this was new territory for me.  I have created a new professional network that I believe will allow me to access future career opportunities working in dramaturgy.  I have learned much about the value of my skills as a literary researcher and how they are applicable beyond a strictly academic setting.  I should also say that, while I love my work in academia, working as a dramaturg has been personally pleasing and rewarding, and I am stoked to explore dramaturgy further as a potential career.

You can read Morgan Gates’ personal account of her summer in her blog post: “Dramaturgy with Santa Cruz Shakespeare: Public Humanities Summer Fellowship.”

Still want to read more? Check out our interviews with two other THI Summer Fellows: Sienna Bellou at The Cabrillo Festival of Contemporary Music, and Ashley Herum who, like Gates, is working with Santa Cruz Shakespeare as a dramaturg this summer.