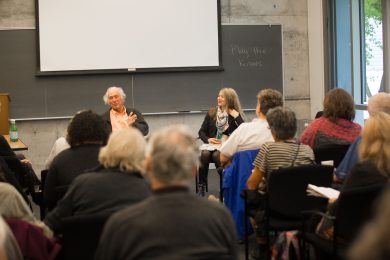 This summer, The Humanities Institute was thrilled to sponsor two Fellows, Ashley Herum and Morgan Gates, to work with Santa Cruz Shakespeare to present the Bard’s works to the local community at a large scale at summer-long festival at DeLaveaga Park. The organization also took part in UC Santa Cruz’s annual Weekend with Shakespeare.

Herum talks further about her professional, artistic, and personal growth in our interview. 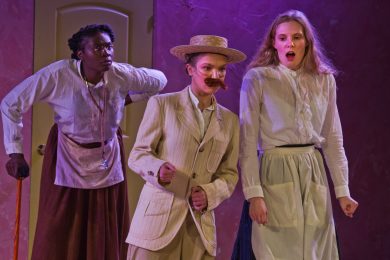 Morgan Gates, also a Literature PhD Candidate, is a Summer Public Fellow with Santa Cruz Shakespeare. In that role, she’s worked as the dramaturg for for Santa Cruz Shakespeare Fringe, the company’s intern group for early career actors, directors, and dramaturgs, to produce William Shakespeare and John Fletcher’s The Two Noble Kinsmen. As the dramaturg for The Two Noble Kinsmen, Gates has worked with UC Santa Cruz Professor Emeritus Michael Warren, SCS’s lead textual consultant. Gates sees her dramaturgy as an important part of her work in the public humanities.  “I sense that, generally, Shakespearean theater could strike folks in the community as elite and unapproachable,” says Gates.  “This is really not the case!  Especially in its time, it was definitely not “elite” literature.  It was democratic, bawdy, down-to-earth, dealing in realistic human concerns that cut across distinctions, such as class, sexuality, and gender.”

Gates talks more about her role with Santa Cruz Shakespeare in our interview.

Both the Weekend with Shakespeare and the Santa Cruz Shakespeare Summer Festival are annual events: be sure to look out for summer 2020 event announcements here at THI, and join us then for a new set of productions!

Full photos of the Weekend with Shakespeare are viewable on the event page.