Community Partnership as a Way to Build Bridges 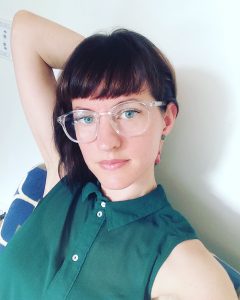 Melody Nixon is a second-year doctoral student in the History of Consciousness program at UC Santa Cruz, and a 2018 – 2019 Public Fellow in The Humanities Institute. This year, she worked on the Institute’s communications, social media, and events to translate a variety of Humanities projects on campus for the broader Santa Cruz community.

Rachel Deblinger (RD): You have been working with The Humanities Institute on communications this year. As a representative of THI, I can say that you have done an incredible job of communicating the variety of what we do through a number of channels. How would you describe what you have been doing?

Melody Nixon (MN): Thanks so much for that Rachel, and I definitely couldn’t have carried out this role this year without your insight and guidance, as well as the incredibly supportive team at THI. I would describe what I have been doing as a translation role—translating the varied and esoteric work that’s happening in different Humanities departments on campus into language and stories that can be engaged with by a general audience. Unless you’re deep in the weeds of a particular discipline, or subfield of a discipline, it can be so hard to understand the specialized vocabulary of their discourses. But it seems to me that lots of people in the Santa Cruz community are interested in what’s happening on campus, and want to engage with what we’re doing. So it’s about finding ways to do that that are inclusive and generative of dialogue.

RD: Why is this important to you? Have you spent much time outside of academia yourself?

MN: Yes, as someone who was a late-entry or “nontraditional” student, I get that academia can seem intimidating and inaccessible. I didn’t go to college until I was in my mid-20s, and at first I didn’t understand what was happening administratively or bureaucratically when I got there. This was a question of familiarity. No one in my family has done a PhD before, and when I started my PhD here at UC Santa Cruz, I didn’t know the difference between a “PhD student” and a “PhD candidate”! I literally put in my profile that I was a candidate until someone pointed out that I hadn’t qualified as one yet. And yet I’m very invested in my studies and am attending conferences and presenting my work. So these barriers to entry and elitism that academia has a reputation for are actually unnecessary—we shouldn’t have to be able to speak a certain language in order to be here. When your interest is sparked, then you can start to learn the specific language of your field—but I don’t think that knowledge should be a condition of entry.

RD: What’s your relationship to the community here in Santa Cruz? 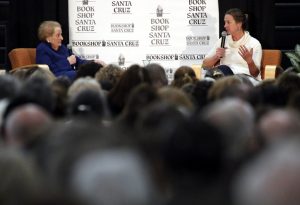 MN: I didn’t have much of a relationship to Santa Cruz or California prior to coming to UC Santa Cruz. I’m a migrant to the U.S. so American culture feels foreign to me too, though I worked on the east coast for a number of years. I got to know locals in my first year here by meeting my neighbors, going sailing, and running a series of creative writing workshops last summer in the homeless community (which connects to the work I was doing back on the east coast, facilitating writing workshops in a center for LGBTQ homeless youth). I’ve found the non-academics I’ve met here to be really interested in my work, my program, and what’s happening on campus. That people in the Santa Cruz community have strong feelings about the presence of the university and its economic and social impact on the landscape of the county strikes me as a reason to make extra effort to overcome the perceived barriers between “us” and “them” and create events we can all take part in. One arm of THI that is extremely successful is our events, and I think this is because we really think about how to work with the community. An audience member at our Madeleine Albright event told me she really felt welcomed by THI’s events and communications, and like she could attend anything. That was great to hear.

RD: Your own research is on black poetics and poets who implicitly achieve political ends through aesthetics. Can you tell us more about it?

MN: I’m still formulating my research because I am in the early stages. But as it stands my project is to look at contemporary black poetry in the U.S. and how it is thinking through and redefining what it means to be human, and specifically, a human subject. The Enlightenment subject as it was formulated as sovereign and European excluded many kinds of subjectivities, and in response Black Studies theorists and poets are thinking about black subjectivity, and what blackness means at the level of being. There’s a super rich and vibrant field of scholarship on black critical theory right now, and the poets I’m looking at are consciously engaged with this field. What they’re doing feels like a powerful burgeoning of a movement in art and thought.

RD: How has this position changed the way you think about academic life, the value of the Humanities, and the urgency of Humanistic thinking?

MN: As the value of the Humanities is being contested, both inside academic institutions and outside of them, I think Humanities scholars are taking onboard the responsibility of showing how our work is connected to issues that are really at the core of human society. Like, how do we effectively talk with one another about politics and power? How does an understanding of art, literature, history, and linguistics allow us to imagine different kinds of futures? 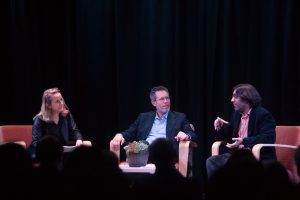 I have realized how much more relevant the Humanities are to the real world than I really understood before. At THI we are running events that directly engage with the current political climate in the U.S. (such as events on Anti-Semitism online, race and freedom, and data and democracy), which is a matter of urgency for everyone, inside or outside academia. How the next few years proceed politically will have an influence on the lives of future generations, through the potential impacts on our rights and bodies, our social infrastructure, and on our society and environment. We in the Humanities are trying to understand this change as it is happening—Banu Bargu’s and Massimiliano Tomba’s research cluster this year on “After Neoliberalism” is a really good example of this, and I’m thrilled they’re going to be continuing with a series of workshops and events as a cluster on Neo-Authoritarianism next year. Humanists are also looking at bringing conversations about ethics and responsibility into the hard sciences and technology, which is an important intellectual function in this time of the dawning of AI.

RD: Has this work challenged your thinking around activism?

MN: Working with THI has helped me to return to a belief in dialog and communication, and in bridge building rather than bridge burning of any kind. I think I have learned a lot from THI’s approach to bringing political conversations into the community with a lot of generosity for the audience and a consistent invitation to dialogue.

RD: Has this work changed how you think about the ways we can and cannot serve scholarly work through activism? And how are you thinking about the future of activism as a result?

Whatever your tactics or viewpoint, I think social justice activism is going through a reckoning at present. People are still taking to the streets when basic rights are put under threat or stripped away (such as a woman’s right to make decisions about her own body in GA and AL), but so far mass assembly has, at best, been overlooked or derided by the current administration or, at worst, met with violent counter-protesting by the Alt-Right. We need to think about new tactics and strategies and clearly, bridge building. We don’t need more division or combat—I think we’re all pretty traumatized by the violent rhetoric of the current administration and its supporters. And this is where the humble world of communications comes in. Communicating clearly and nonviolently and being thoughtful about the issues you’re engaging with in a public format can make a difference.

One of the most rewarding parts of this year-long fellowship has been hearing from Santa Cruz community members that they feel welcomed by and warmly included in our events—even events that address “controversial” topics like Anti-Semitism and the racism of technologies developed by Silicon Valley. That tells me THI is doing something right.

RD: What have you gained an appreciation for this year that you hadn’t considered before? 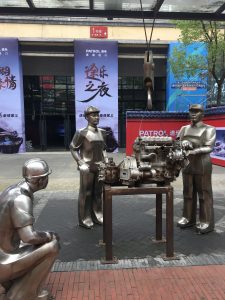 MN: I’m happy that we got to spotlight UC Santa Cruz graduate students this year through a series of profiles highlighting THI graduate work, which really gave me an appreciation for the rich variety of Humanities work being carried out on campus. Oftentimes graduate student achievements can be obscured or not celebrated, by ourselves or others, because we are so focused on reaching the end of a long process and we don’t realize that each step along the way is an achievement in its own right. We’re also in the position of being able to take big risks in our research and thinking because we don’t have an academic career to mess up yet or tenure-track assessments to jeopardize, so I think amazingly innovative work can be done during the doctoral stage. Learning about Sarah Chang’s research trip to the workers’ quarters of Chinese factories for example, Alexander Grundler’s work on the moral dimension of dance, or Jane Komori’s research on settler colonialism, Japanese-American identity, and organic farms in Japan helped me appreciate the depth of my classmates’ work. My colleagues have been all over the world before they’ve established academic careers. It says to me that Humanities students are pretty brave, and really care about the questions they’re asking.

Melody Nixon is a 2018-2019 Public Fellow with The Humanities Institute. Read about the others in her cohort: Trey Highton, Wyatt Young, and Gabriela Ramirez-Chavez. Learn about this year’s cohort of ten new Public Fellows.